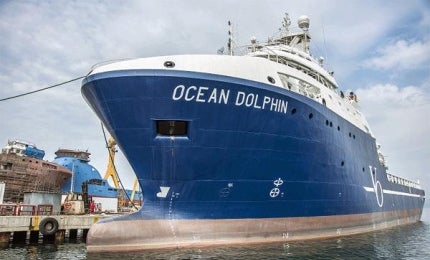 Ocean Dolphin is the first of two seismic support vessels (SSVs) built by Turkish company Cemre Shipyard for Norwegian shipping company Norfield. The vessels are intended to meet the demanding needs of the seismic industry and will be operated by Vestland Offshore.

Norfield placed an order with Cemre Shipyard for the construction of two seismic support vessels in December 2013.

The first vessel, NB 35 (New Build 35) was launched during a ceremony that took place in March 2015. It was delivered to Norfield in August 2015, while the second vessel is expected to be handed over later this year.

"Norfield placed an order with Cemre Shipyard for the construction of two seismic support vessels in December 2013."

On her maiden project, Ocean Dolphin was mobilised at Malta in the Mediterranean Sea under a five-year time charter with Dolphin Geophysical.

Ocean Dolphin is a high-capacity SSV based on the SALT 450 SSV design. It was developed by Salt Ship Design in cooperation with Vestland Offshore. Vestland Offshore is responsible for the project management and construction supervision as well as full technical and commercial management of the vessel.

The purpose-built vessel has a length of 69.8m, moulded breadth of 17m, and deadweight of 2,800t at 6.2m draught. The vessel can carry up to 60 personnel, including crew and clients, and is classified by Bureau Veritas.

The vessel has a working deck area of 500m² that offers a load capacity of 1,000t with a vertical centre of gravity (VCG) of 1m above the deck. The cargo rooms on Deck 1 provide additional carrying capacity to the vessel.

The seismic equipment aboard the vessel includes two remotely-operated bunker hose reels, Barovane lifting and storing arrangement, gun winches and arrays, a 12t knuckle boom crane with a maximum outreach of 17m, a streamer reel with capacity for 8,000m streamer cable, and a towing hook with a safe working load (SWL) of 65t.

Navigation and communications of Ocean Dolphin

The seismic support vessel is fitted with storage tanks for carrying 500m³ of marine diesel oil (MDO), 2,000m³ of heavy fuel oil, 180m³ of fresh water, 65m³ of grey water, 25m³ of slop and 25m³ of bilge water. The vessel is also fitted with a box tank below bridge for roll reduction.

Other work and leisure facilities include a seismic instrument room, a seismic workshop, a hospital, a fully outfitted office, a mess room, a TV lounge, a gymnasium, and a dayroom and in-cabin entertainment.

The propulsion system provides a bollard pull capacity of 55t and a maximum speed of 13.5k. The vessel consumes 2.5t of fuel in 24h when sailing at a speed of 5k, whereas the fuel consumption at 12k speed is 10.7t in 24h.