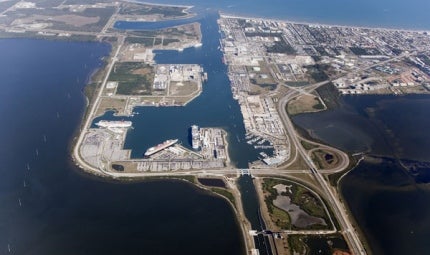 Port Canaveral in Brevard County, Florida, is the second busiest cruise port in the world. The cruise, cargo and military port is owned and operated by Canaveral Port Authority. The port handled more than 3.76 million cruise passengers and 3.9 million tonnes of cargo in 2012.

Major ongoing development works at the port include the construction of the new cruise terminal 1 and the harbour widening and deepening project.

History and details of Port Canaveral

Port construction was approved in 1929, about five decades after it was first proposed in 1878. The port opened in November 1953, started catering to cargo vessels in 1955 and opened its doors to cruise ships in the 1970s.

Port of Salalah, located on the Gulf of Oman in the Arabian Sea, is undergoing a major expansion to double its general cargo handling capacity.

The port also facilitates the NASA space shuttle project, facilitating the floating of external tanks for each mission and the towing back of solid rocket boosters after each launch in the Atlantic Ocean.

The construction contract for the new terminal project was awarded to Ivey’s Construction. The 187,500ft² terminal is being constructed on the south side of the harbour in the Cove restaurant and retail area.

A new boat ramp complex is being constructed close to the harbour’s entrance to facilitate the new cruise terminal. The complex will replace the existing boat ramps at Freddie Patrick Park in the Cove, when commissioned in July 2014. The boat ramp will have facilities including pavilions, fish-cleaning tables, restrooms, boat wash station and accessibility for the disabled.

The harbour widening and deepening project is being implemented to accommodate bigger ships. It involves the widening of the existing 400ft channel by another 100ft and deepening by two foot along the entire length of the harbour. The current depths of the harbour are 44ft at the entrance and 40ft through the main channel.

"The project is expected to create 3,494 permanent jobs and 3,413 construction jobs."

The project is expected to create 3,494 permanent jobs and 3,413 construction jobs.

The two-storey triangular terminal 5, opened in 1991, features a 30ft-high atrium filled with tropical vegetation and three cascading waterfalls. Terminals 10 and 8 were respectively opened in 1996 and 1997. Terminal 8 is designed exclusively for Disney cruise ships and features a 90ft-high glass tower.

The $60m cruise terminal 6 was opened in October 2012, after 11 months of construction. The 120,000ft² terminal was designed and constructed by Skanska, Ivey’s Construction, BEA Architects, BRPH and Stottler Stagg.

The port has nine cargo berths ranging from 400ft to 1,000ft long and 35ft to 40ft deep. It has 49 acres of paved open-air storage facilities and 300,000ft of dockside area with nine million cubic feet of dockside cold / freezer space.

The north cargo area has special storage facilities for cement, petroleum and slag, a petroleum terminal and a 117 million gallon-capacity tank farm. Covered warehouse storage area at the port is 750,000ft².

The port is equipped with tram trains, a 40t-capacity mobile crane, pallet-netting machines, a 2,800ft-long bulk aggregate conveyor with a capacity of 2,200t/h and a heavy-lift capability of up to 100,000t with barge landing. The port incorporates computer tracking systems and portable scanners for cargo tracking.