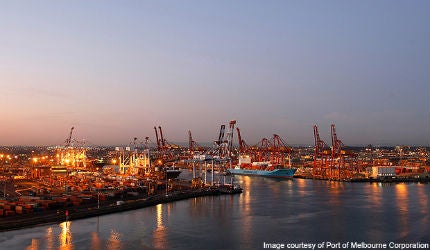 Situated on the mouth of the Yarra River, Victoria, Australia, the Port of Melbourne is owned by the state’s Port of Melbourne Corporation. Built in 1889, it is the country’s largest container and general cargo port, managing nearly 37% of the total container trade. The port is spread over a 143,000m² area.

Each year, more than 3,500 ships visit the Port of Melbourne, an important centre for manufacturing, financial, business and, information and communications technology sectors.

The container terminal operators of the port, DP World and Patrick Stevedores, are responsible for handling most of the cargoes, while Patrick Shipping and Toll Shipping operate the terminals dedicated for Bass Strait Shipping.

A major $1.6bn capacity expansion project was completed by early 2017. Aurecon was the civil engineer for the project. Arup was contracted to provide marine engineering for the expansion project.

Before the port became fully operational in 1889, the Yarra River was unable to receive big ships. As a result, larger vessels unloaded cargo at Hobsons Bay (now Williamstown) or Sandridge. The cargoes were then transported to warehouses by rail or lighter cargo.

To make the river more navigable, in 1877 the colonial government of Victoria employed Sir John Coode, an English engineer, to find a solution. In accordance with Coode’s plan, a canal was built to the south of the existing river to change its overall course. This allowed large ships to sail to Queensbridge. Coode also supervised the construction of Victoria Dock in swampland.

"The channel-deepening project provided the Port of Melbourne with 14m draught by removing of 22 million cubic metres of sand and silt from existing channels."

Over time, port facilities and capacity increased, and new roads linked the port to bridges over the Yarra. Access to the east of the docks was restricted due to the construction of two bridges, the Spencer Street Bridge in 1928 and the Charles Grimes Bridge in 1975.

Expansion came in the form of the Appleton Dock in 1956 and Webb Dock in 1960. The first container terminal was built on Coode Island.

To allow larger ships to enter the Port of Melbourne, the channel deepening project dredged Port Phillip Bay in February 2008 to extend the shipping channels. Completed in November 2009 with a $248m investment, the project provided the port with a 14m draught by removing of 22 million cubic metres of sand and silt from existing channels. To help protect Port Phillip Bay ecosystems, environmental supervision is expected to continue for several years.

The Dynon Port Rail Link was constructed in July 2009 to provide a direct and uninterrupted link to the port, connecting the port’s rail junction to the main rail line north of Footscray Road. Swanson Dock West was reconnected to a railway line in February 2003, while Swanson Dock East railway facilities are currently undergoing refurbishment. There is also a plan to connect Webb Dock, south of the Yarra River, to a railway line, and feasibility and economic studies for the project are underway.

Details of ongoing expansion at Port of Melbourne

The latest expansion project worth $1.2bn was announced in April 2012. An additional investment of $400m was announced in June 2012 to further consolidate the import and export auto trade at Webb Dock.

The project is expected to generate 700 direct jobs and 1,900 indirect jobs. It primarily involved the construction of a new container terminal at Webb Dock with a capacity of handling one million containers a year and upgradation of the infrastructure at Swanson Dock. The project also created a new park at the port site and made improvements to the buffer zones around the port area.

The second announcement made in June 2012 facilitated the construction of 920m of new Wharfs, 1,000 supporting piles, and 24,000m² of concrete decking. It enables the port to handle more than 600,000 vehicles annually.

In the financial year to end-June 2009, the port handled 2.16 million twenty-foot equivalent units (TEU). During this period, core container trade dropped by 4.4%, even though the port managed to maintain its leading container port position. Export and import business suffered due to the global economic slowdown and a drought in south-eastern Australia. Imports decreased by 605% and exports by 3.3%.

"The Port of Melbourne is located on the mouth of the Yarra River, Victoria, Australia."

Total container trade carried out by the port in the financial year 2009-2010 was 2.237 million TEU, an increment of 3.7% over the previous financial year. As a result of container and new motor vehicle trades, overall trade increased to 75.4 million revenue tons.

The port witnessed a total container trade throughput of 2.65 million TEU in 2016.

The Port of Brisbane is the largest general cargo port in Queensland, Australia.

Security rules and regulations at the port are set in accordance with the Maritime Transport and Offshore Facilities Security Act (MTOFSA) 2003 (Commonwealth). The port applies three levels of security. Level one is the default level, level two is applied when there is a high risk of a security incident, and level three is enforced when the risk of security is imminent.

The 34 commercial berths available at the port include two modern, purpose-built four-berth international container terminals. These multi-purpose berths are capable of handling a range of cargoes from timber to motor vehicles. The port also has dry cargo berths for handling cement, grain, sugar, fly ash and gypsum. It uses the latest handling methods for critical liquids such as molasses, crude oil and petrochemicals.