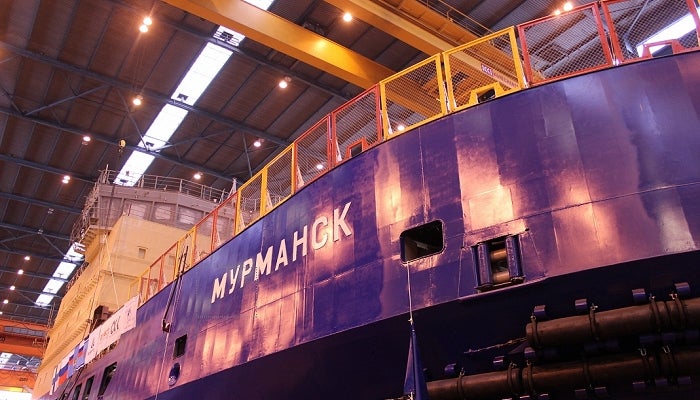 The Project 21900M icebreakers were built for Russia’s Federal Agency of Marine and River Transport (Rosmorrechflot).

The Arctic is the first vessel of three Project 22220 LK-60 Nuclear Icebreakers being built for Atomflot.

The keels of three upgraded diesel-electric icebreakers were laid at Vyborg Shipyard in late 2012. The first ship in class, Vladivostok, was launched in April 2014 and commissioned in the fourth quarter of 2015.

The second icebreaker, Murmansk was launched in March 2015 by Arctech Helsinki Shipyard under an outfitting contract with Vyborg. It was delivered in December 2015. The third vessel in series, Novorossiysk was launched in October 2015 and delivered in December 2016. The icebreakers were commissioned by the end of 2016 under the federal target programme of the Russian Transport System Development (Marine Transport) for 2010-2020.

The Project 21900M icebreakers are operated by the Federal State Unitary Enterprise Rosmorport and are deployed in the Baltic Sea and the Arctic Sea under the Russian Federation flag.

The Project 21900M is an advanced variant of the Project 21900-class designed by CDB Baltsudoproekt. The ship integrates a long forecastle and houses engine room in the middle and propellers in the aft. It is equipped with an ice-strengthened hull, allowing operation in ice thicknesses up to 1.5m.

The propulsion system also enables the clearance of 1.3m-thick ice in reverse direction. The unique technical solutions incorporated in the design allow the vessel to achieve improved icebreaking capability and long-endurance.

The Project 21900M icebreakers are capable of sailing in temperatures as low as -40°C. Each vessel can complement 36 crew members and 22 special personnel.

Cargo and capacities of the Russian icebreakers

The 21900M-class features an 800m² aft cargo deck, which can accommodate 33 TEUs, including refrigerated containers with power supply, and other types of cargo. The double-decked vessels are equipped with a fore helicopter deck for supporting the operations of a single helicopter.

"The Project 21900M icebreakers were designed by CDB Baltsudoproekt."

The four Wärtsilä main diesel generator sets aboard the vessel are rated at 6,750kW each. The propulsion system, integrating two full-circle azimuth thrusters and a steerable propeller, generates a total power output of 17.4MW.