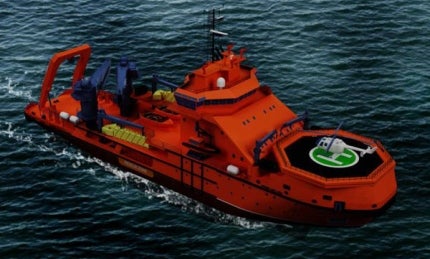 Project MPSV06 is an ice-breaking rescue and salvage vessel designed by Marine Engineering Bureau. The keel for the first Project MPSV06 vessel, named Spasatel Petr Gruzinskiy, was laid in July 2010 at Amurskij shipbuilding yard, for the Ministry of Transport of the Russian Federation, and is yet to be delivered.

State Maritime Rescue Coordination Centre (SMRCC) has ordered two Project MPSV06 ships. The two vessels will be built at the Wismar Yard of Nordic Yards and are scheduled to be delivered by 2015. The first steel was cut in September 2013 and the keel laying ceremony was held in November 2013.

The main tasks of the MPSV06 ship will be rescue and salvage operations in the areas of navigation, fishing and oil and gas recovery. The ship’s ice-breaking capabilities will allow it to operate in ports and frozen harbours including freezing non-Arctic seas where the ice thickness is less than 1.5m.

Brittany Ferries placed an order for a new cruise-ferry named PEGASIS in January 2014.

The ship will provide technical support and assistance to vessels in distress. It will also search, rescue and evacuate people in emergency situations, and will be capable of pumping out 1,700m³ of water per hour from flooded compartments of other ships.

MPSV06 will be outfitted with advanced technologies to investigate sea bed and damaged objects up to 1,000m deep. Two underwater diving complexes, a remotely operated deep-sea submersible of the Scorpio type and a side-scan sonar device will be provided.

The vessel will carry out fire-fighting and emergency towing operations and will also be provided with machinery needed to survey and clean underwater hull parts of vessels.

The vessel will be equipped with a high-speed working boat that can reach a maximum speed of 35k and carry 24 people.

It will feature two marine evacuate systems for rescuing people from surface water. These systems will consist of closed life rafts, platforms for people and slides to reach the rafts. In addition, a special life raft will be fitted to lift people from water and a special net for lifting a group of people.

The ship will be equipped with onboard trawl system, two brush-type skimmer systems, two boom complexes and two boom-handling boats to recover floating pollutants (oil and similar substances) and separate them from water.

"A helipad will be built at the fore end."

The vessel can accommodate 26 crew members, including two medics, 12 special personnel and 95 survivors.

The MPSV06 vessel will be fitted with a diesel-electric propulsion system, which includes four diesel generators with capacity of 10.6MW. Two AC propulsion motors will drive two full-circle rudder propellers with a power capacity of 3.5MW, equipped with fixed pitch propellers without nozzles on each screw.

The vessel will feature two bow thrusters of screw within tube type with capacity of 1,400kW each.

The propulsion system will allow the vessel to cruise at a maximum speed of 15k.