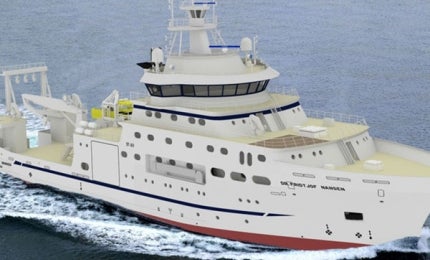 The new marine research vessel RV Dr Fridtjof Nansen is owned by the Norwegian Agency for Development Cooperation (NORAD). The vessel was built as part of the United Nations’ (UN) Food and Agriculture Organization (FAO) project and is jointly operated by the Institute of Marine Research (IMR) and the University of Bergen (UIB) to help developing countries improve their fisheries management.

In March 2013, Norwegian ship designer Skipsteknisk was awarded the contract to design the vessel under the designation ST-369. The construction contract was awarded to Spanish shipyard Astilleros Gondan in March 2014.

The new fishery and oceanographic research vessel was delivered in January 2017 and launched in May 2017. It replaces an old vessel of the same name, which has been navigating the African coast since 1993, carrying out in-depth research in the marine ecosystems for the EAF-Nansen Project.

Dr Fridtjof Nansen was built according to ICES standards, which limit underwater radiated noise from research vessels. IMR and Skipsteknisk worked together on the specifications and drawings of the vessel.

The overall length of the vessel is 74.5m, moulded breadth is 17.40m and length between perpendiculars is 66.10m.

Dr Fridtjof Nansen features specialised laboratories, including a wet lab, also known as the fish lab, a plankton sampling lab, also called Benthos/Plankton lab, a dry lab for oceanographic studies, a foto lab, and climate and seawater labs. To conduct marine research, the vessel is equipped with a spacious operation centre with offices and a library, a CTD lab with a 27m² CTD hangar and a 53m² main scientific hangar.

The research vessel can accommodate 45 people, including 15 seamen and 30 scientists. On-board tanks are capable of carrying 490m³ of marine diesel oil (MDO) and 175m³ of freshwater.

"The propulsion system allows the vessel to cruise at a maximum speed of 14.5kt."

Dr Fridtjof Nansen is equipped with electric driven fishery and scientific winches, which were supplied by RAPP HYDEMA. It includes two mooring winches with a capacity to trawl 40t each, one outhaul winch at the cod end with a capacity of 3t and one CTD winch. Other fishing winches include one pelagic net drum of 40t capacity, two trawl winches of 40t, one combined Gilson and wire winch of 11t, and a multi-purpose deep sea instruments winch.

It is also equipped with one pelagic net drum (40t) and one bottom traul split net drum (26t), as well as one benthos sledge winch.

Dr Fridtjof Nansen features a diesel electric propulsion plant comprising two DC electric motors working in tandem, each with a power rating of 1,500kW. The propulsion system allows the vessel to cruise at a maximum speed of 14.5kt.

Propulsion includes five-bladed, fixed pitch propeller (FPP) thrusters, an 880kW retractable azimuth thruster in the bow, two 600kW tunnel thrusters, one double tunnel at the bow and one in the stern.