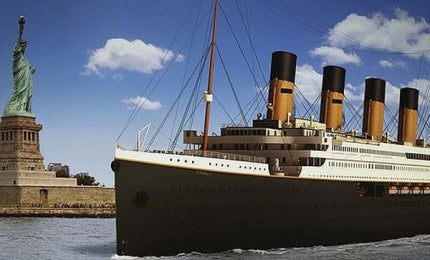 The proposed ocean liner Titanic-II is a dream project of Australian billionaire Clive Palmer. His cruise company Blue Star Line announced the project in April 2012. Titanic-II will be a replica of the Olympic-class RMS Titanic, which sank in April 1912 in one of the world’s worst cruise ship disasters.

Titanic-II is the first of four cruise ships ordered to the Chinese state-owned CSC Jinling Shipyard. The ship is scheduled to go on her maiden voyage in late 2016 from Southampton, England, to New York, US, following the same route as that of the original Titanic.

Blue Star Line partnered with Hamburg Ship Model Basin (HSVA), a hydrodynamic service and consulting firm, to conduct the first model testing of the proposed Titanic-II in September 2013 in Germany.

Mein Schiff 3 will be the first cruise liner of the ‘feel-good fleet’ being constructed by STX Finland at its Turku Shipyard.

The new cruise ship will weigh approximately 55,800t, will comprise nine decks and will be designed to recreate the grandeurs of its namesake. The vessel will have an overall length of approximately 883ft and will feature 840 rooms to provide accommodation to 2,435 passengers and 900 crew members.

The new ship, which its developers claim will match the original Titanic for luxury, will feature modern technology and the latest navigation and safety systems. The most fascinating and eye-catching feature of the ship will be its first-class grand staircase descending through most of the boat’s decks all the way down to Deck F. The staircase starts from the boat deck under a large wrought iron and glass dome, at the centre of which is a glittering 50-light crystal chandelier.

Other amenities aboard the ship will include a gymnasium, a squash court, swimming pool, baths, theatre and casino.

Titanic-II will also feature an exact replica of The Bridge as it was in the original ship, which will be the vessel’s navigational control centre designed and configured to modern standards and regulations. It will provide a complete view of the forward and sides of the ship, from where directions and instructions will be communicated to the engine room, as well as other areas across the vessel.

The Marconi room, which was used for communication aboard RMS Titanic, will be recreated onboard the new ship but will not be functional.

Titanic-II will have a big traditional dining room and specialty dining venues. RMS Titanic’s Café Parisien will be designed similarly aboard the new cruise liner to utilise the small promenade outside the a la carte restaurant.

Titanic-II will also feature an exclusive smoking room largely coloured in blue and red to provide a warm and rich ambience.

The First-Class Dining Saloon will be built exactly the same way it was built aboard RMS Titanic, which was around 35m-long covering the entire breadth of the ship and decorated in Jacobean style almost completely in white.

Facilities at the onboard pool area will include a row of changing cubicles and showers to allow passengers to have a quick wash after a swim.

The luxurious staterooms aboard the Titanic-II will be portrayed in a similar manner to the original vessel. The RMS Titanic used walnut, sycamore, mahogany, satinwood and the best oak panelling in the First-Class rooms.

In April 2013, Blue Star Line contracted Finland-based Deltamarin to design the Titanic-II passenger liner. The company will also manage the Titanic-II project development and will coordinate the activities of the individual contractors, such as shipyard, architects, interior designers and operations managers.

"The Titanic-II cruise ship will be powered by a diesel engine and will feature four smoke stacks similar to the coal-powered Titanic."

V.Ships Leisure was appointed as the official ship management services partner for the project in the following month.

In July 2013, Lloyd’s Register was contracted to review the design and safety features, including the class rules and Safety of Life at Sea (SOLAS) aspects.

Swedish company Tillberg Design was contracted by Blue Star Line in May 2014 to design the interiors and all of the public areas, including the passenger cabins, smoking room, first class lounge, the grand staircase, Café Parisian and all modern features on the safety deck.

A Memorandum of Understanding (MoU) was signed between Blue Star Line, Deltamarin and AVIC Kaixin (Beijing) Ship Industry in May 2014, appointing the AVIC to promote the Titanic-II project and coordinate between sponsors from China.

The Titanic-II cruise ship will be powered by a diesel engine and will feature four smoke stacks similar to the coal-powered Titanic.

The new cruise ship will be welded instead of riveting and will have a bulbous bow to provide fuel efficiency. It will also be outfitted with a large rudder and bow thrusters for smooth and easy manoeuvrability.