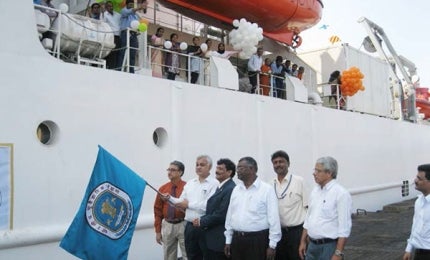 RV Samudra Ratnakar is a new oceanographic research vessel built by Hyundai Heavy Industries (HHI) at its Ulsan shipyard in South Korea. The vessel was built at an estimated cost of INR5.49bn (approximately $100.4m), for its owner Geological Survey of India (GSI). First steel for the vessel was cut in March 2012 and delivery took place in September 2013.

The research vessel was dedicated to the nation in a ceremony held at Kandla Port in October 2013. It then underwent successful sea trials and GSI geoscientists were trained by the OEM in the operation and maintenance of the various scientific equipment onboard.

"The research vessel was dedicated to the nation in a ceremony held at Kandla Port in October 2013."

In 2013, the vessel’s maiden scientific cruise in the Arabian Sea formed part of the National Programme on High-Resolution Seabed Mapping and Natural Resource Evaluation (NHRSM & NRE).

GSI contracted the Shipping Corporation of India (SCI) and Wartsila Ship Design Norway (WSDN) for the design of the vessel.

The 103.4m-long vessel has a moulded breadth of 19.2m and deadweight of approximately 2,700t at maximum draught of 6m. The gross and net tonnage capacities of the vessel are 6,551t and 1,965t respectively. The vessel can cruise at a maximum speed of 14k for 45 days continuously.

She features a differential global positioning system (DGPS) fitted for working in all-weather conditions, to provide stability to the vessel while carrying out deep-sea explorations. The vessel can provide accommodation to 73 people, including 25 geoscientists.

Scientific equipment onboard the research vessel

The vessel features onboard laboratories fitted with advanced acoustic equipment, which allows scientists to map the deepest layer of the oceans and carry out mineral explorations and other oceanographic research.

Contractors and suppliers for the vessel

Caley Ocean Systems was contracted by HHI to supply oceanographic winches and A-frame systems for the new research vessel.

Lankhorst supplied one 6x36WS+IWRC and two LANKOPACK steel wire ropes for the oceanographic research vessel. A 30mm LANKOPACK was used as a traction winch and another of 16mm as an auxiliary winch drum.