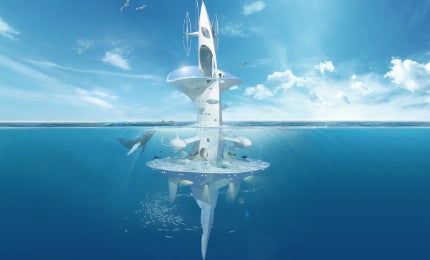 SeaOrbiter is an oceanic exploration vessel and a universal scientific laboratory designed by the architect Jacques Rougerie.

The floating vessel will be the first facility to provide explorers the capability to conduct oceanic underwater missions 24/7 at a stretch of six months and more.

The project is being developed by SeaOrbiter SAS, a company comprising an international team of experts headed by Jacques Rougerie and supported by a number of industrial, academic, technological, scientific, educational and media partners.

Following completion of construction in 2016, the vessel will undergo six months of sea trials in the Mediterranean Sea, perform exploratory missions in the same sea for roughly a year and will later be deployed for long-term missions in the Atlantic Ocean.

"A lookout post will provide a platform for marine life observation from the surface."

Construction of the first component of the ocean exploration vessel, the Eye of SeaOrbiter, was completed in May 2015. The 18m high component will accommodate the vessel’s lookout post, communication systems and an attached wind turbine.

Sealium, a recyclable aluminium brand created and patented by Constellium, is being used as the main material for constructing the vessel.

The vertically aligned vessel will be 58m high, weigh 550t and have a displacement of 2,600t. It will be positioned partly 27m above the water line and partly 31m below the water line.

It will provide accommodation facilities for up to 22 people and will be supplied with daily provisions by boats. Crew members will comprise six people for vessel operations, four scientific operators or researchers, two multimedia operators, and six aquanauts for developing specific programmes in the vessel’s hyperbaric laboratory.

SeaOrbiter will be capable of accessing ports by folding up its 180t keel and readjusting its ballast system, reducing its draft to 8m.

The vessel operates globally and provides an opportunity for researchers to focus on some of the world’s most serious environmental concerns, such as underwater earthquakes and landslides.

The seventh deck, the first deck above water, will include a multidisciplinary modular laboratory, a medical zone and a fitness area.

Deck eight will have a command bridge, deck nine will house a diving room and a scientific wet lab, while the tenth deck will featureengine rooms and storage areas. The next two decks will respectively have a boats storage area and the lookout post.

Equipments and facilities aboard SeaOrbiter

The vessel will be equipped with its own wind turbine and a 350m² solar facility to meet its electricity needs.

Other areas and facilities aboard the vessel include an outside deck equipped with two handling cranes, an above-water, retractable, rear access ladder that can be lowered to the sea and a winch and abyssal platform.

The vessel will be capable of deploying various exploratory devices under water and operating in silent mode.

A lookout post will provide a platform for marine life observation from the surface. The first 50m beneath the surface can be explored by divers living within the atmospheric pressure.

The hyperbaric laboratory will be specifically designed as a space simulator, where Nasa and European Space Agency (ESA) can perform experiments and train astronauts.

The official partner for the project is Rolex, while industrial partners include Technip, ABB, Constellium, Bureau Veritas and Ponant.