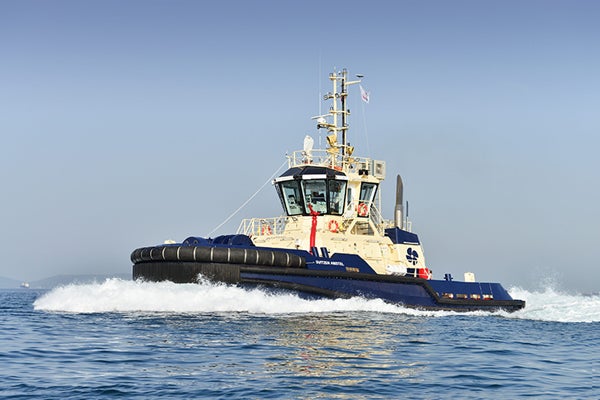 The new series offers a bollard pull between 60t and 75t, depending on the propulsion system. The tugs are designed to deliver superior performance in ship-handling missions for ocean-going vessels.

The 2400 SX boat has a wider hull than that of its predecessor, Ulupinar, in order to accommodate larger, more powerful Caterpillar engines.

The hull integrates a heavy-duty rubber fender system. The design was optimised with functional input from Sanmar’s tug operation division.

The design emphasises low-manning operation with highly automated systems. The layout is contrived to meet common manning standards, and accommodation can be modified to cope with user requirements.

The boat’s optional layouts include a basic day boat, and a configuration with accommodation for up to six crew members.

A DMT TW-E250kN electrical drive towing winch offers a band brake holding load of 150t.The winch can drag 25t at a rate of up to 9m / min.

The tugboat also features a towing hook and a hydraulic / electrical driven capstan with a maximum pull capacity of 5t.

Optional features include an aft winch with 25t pull at up to 9m/min, a hydraulically operated 2t knuckle-boom / folding boom crane, and a marine-type hydraulic-driven tow pin.

The boat is equipped with an engine-driven fire pump, which offers a maximum flow of 600m³/hour. A manually operated firefighting system (FFS) monitor is also installed aboard the vessel.

The communications are complemented by an intercom, an SP telephone, and a global maritime distress and safety system (GMDSS A2).

Located on the upper deck, the captain and engineer cabins include washbasins, a mess, a lounge and a galley.

The lower deck features two double cabins, a water closet and a shower. The accommodation units are outfitted with IMO-approved, teak-imitating floor material.

"The tugs are designed to deliver superior performance in ship-handling missions for ocean-going vessels."

Accommodation areas are furnished with a heating and air-conditioning system. The boat’s insulated interiors ensure sound levels below 60dB in cabins and below 70dB in the wheelhouse, passageways and the mess room.

Also installed are two Caterpillar C4.4 generator sets with an output of 86ekW each. The maximum speed is 12.5k for the 60t variant, and 13k for the 70t and 75t variants.