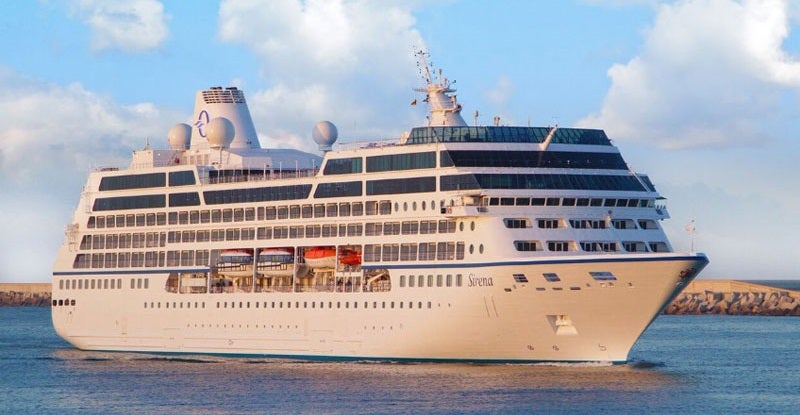 Norwegian entered an agreement with the vessel’s previous owner, Princess Cruises, in 2014 to acquire the cruise ship. The ship has been purchased and renamed Sirena by the company in March 2016.

"The vessel has now joined three other sister vessels, Regatta, Insignia and Nautica."

Following the acquisition, the vessel underwent a refurbishment in Marseille, France, for a period of 35 days. The total amount spent on the refurbishment was approximately $40m.

The vessel has now joined three other sister vessels, Regatta, Insignia and Nautica. The Marshall Islands-flagged vessel began her 14-day maiden voyage on 27 April 2016 from Barcelona to Venice.

The vessel is installed with stabilisers to reduce the roll during wind and wave conditions.

The refurbished cruise ship has been designed to reflect a strong and modern identity. It features 11 decks, including nine decks for guests. It provides accommodation for 684 guests in double-occupancy rooms. The vessel has 400 crew members, with a guest to staff ratio of 1.71:1.

The suites are equipped with a refrigerated minibar and flatscreen TV among other facilities. A twice-a-day maid service and a 24h butler service are also available in these suites.

The luxury is further enhanced in all suites and staterooms with amenities provided by luxury goods brand Bulgari.

Dining and entertainment venues aboard the cruise ship

The pool deck accommodates a large heated pool and two whirlpool spas. A styling salon, a spa terrace, a card room and a fitness centre are also located on the same deck.

The Sports Deck features a fitness track, a nine-hole golf course, a shuffle board and a sun deck. The vessel also boasts a library and a medical facility.

Magicians, comedians and other artists aboard the vessel entertain the gusts through various music shows and live performances.