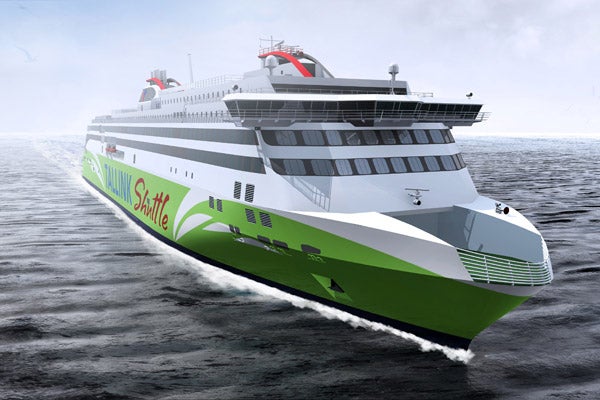 The first piece of steel was cut for the vessel as part of a ceremony held in August 2015, while keel-laying began in February 2016. The ferry was delivered in early 2017.

Fuelled primarily by LNG, the vessel complies with new, more stringent regulations for emission control areas (ECA), including the Baltic Sea. It operates on the Tallinn-Helsinki route under the Tallink Shuttle concept, the firm’s service concept for fast ferries.

Named Megastar in January 2016, the ferry is classed by Bureau Veritas, whose subsidiary Tecnitas performed risk assessment studies for LNG bunker operations in Helsinki and Tallinn ports, as well as hazard identification (HAZID) studies for the LNG propulsion and storage on-board.

The overall cost for the construction of the LNG-fuelled ferry was €230m ($260m). Nordea Bank Finland arranged a 12-year loan of €184m ($208m), which was 95% guaranteed by Finnish export credit agency Finnvera.

“The vessel complies with the new, more stringent regulations for the emission control areas (ECAs), including the Baltic Sea.”

Up to 20% of the total cost was paid during the construction period and the remaining was paid on delivery.

The vessel integrates an innovative hull design, which minimises the flow resistance and enables the ship to operate in icy waters. The vessel has also been designed to provide efficient and fast cargo turnaround in ports.

Propulsion details of the fast ferry

The propulsion system provides the vessel a service speed of 27kt.

Stena Superfast X, a new fast Ro-Pax ferry, was launched at Dublin Port, for service between Holyhead and Dublin, in March 2015.

The engineering and design work for the vessel’s heating, ventilation and air-conditioning (HVAC) systems were performed by Sance in collaboration with Orsap.

Becker Marine Systems has been contracted to supply two of its proprietary TLKSR twisted leading-edge rudders with bulbs for the twin-screw ferry, to enhance its manoeuvrability.