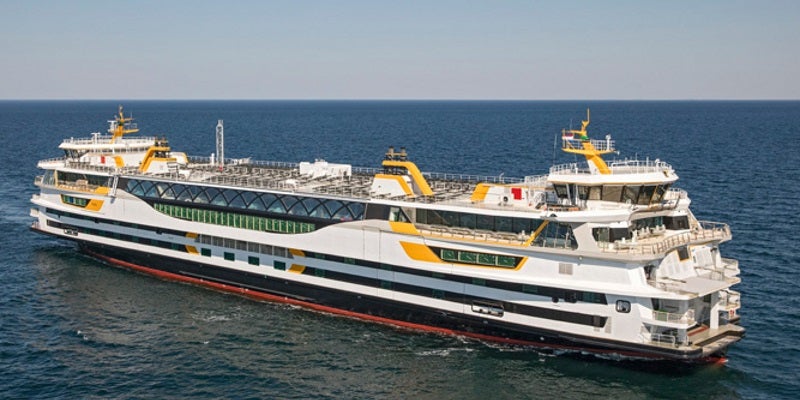 Texelstroom is a sustainable, new-generation ferry built at LaNaval Shipyard, Spain, for its operator and owner Texels Eigen Stoomboot Onderneming (TESO). The ferry will operate between the islands of Texel and Den Helder, Netherlands.

The eco-friendly vessel is fuelled primarily by a hybrid diesel oil or compressed natural gas (CNG), complemented by electric batteries and solar power. It is also capable of operating solely on diesel.

The ferry project was conceptualised in 2010, the design works were initiated in October 2012, the vessel’s keel was laid in December 2014, and delivered occurred in June 2016. The ferry will start operations following the completion of commissioning.

The design phase of the ferry project formed part of the larger European Union’s I. Transfer Program, which aims to make ferry transport more accessible and sustainable.

The hybrid diesel electric-fuelled vessel is classed by Lloyd’s Register.

The most prominent area within the ferry is the crèche area, whose design is inspired by a sandy beach. The area features backlit decorative panels and a large artificial tree in one of the galleries.

The vessel is propelled by two Rolls Royce azimuth propellers each fitted at the two ends. It is capable of sailing at an average working speed of 10k and a maximum speed of 15k.

The CNG fuel for the vessel is supplied by PitPoint and conveyed to the bunkering station at the island of Texel via a 7km-long pipeline. The fuel is then stored in two containers installed on the vessel’s top deck.

Texelstroom is equipped with a heat recovery system, which recovers the heat from the engines’ cooling liquid to boil a 90m³ water tank to approximately 85°C. The recovered heat is then used to heat the vessel while at dock.

"The eco-friendly vessel is fuelled primarily by a hybrid diesel oil or compressed natural gas (CNG), complemented by electric batteries and solar power."

The vessel is also equipped with 700m² of photovoltaic (PV) solar panels on the rooftop, with an installed capacity of approximately 150kWh, which is used to charge the electric batteries.

Other sustainable design features include the use of an optimised hull design to reduce water resistance and optimised ventilation system on the car decks, while smaller chimneys have been chosen and the wheel houses are arranged to be located in a lower position to improve the vessel’s stability and wind sensitivity.

The initial concept and basic design of the vessel was provided by C-Job, whereas the interior and exterior design was performed by Vripack, who further subcontracted Oliver Design to perform the fitting out works.

The solar panels for the vessel were supplied and installed by Alusin Solar in collaboration with Bikote Solar.

Bolidt supplied its proprietary flooring and decking components for the vessel. Natural gas supplier PinPoint was also involved in the engineering, procurement and construction (EPC) works for the bunker station at the island.