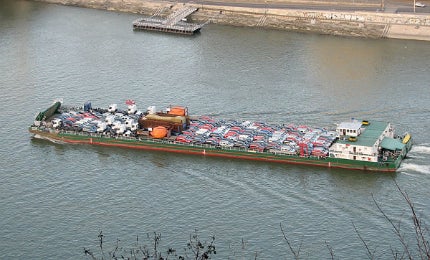 The new boat is designed for operation in inland waterways, and will offer increased efficiency, performance, manoeuvrability and crew comfort.

The idea to develop a new towboat based on thruster propulsion systems was conceptualised at the International WorkBoat Show, held at New Orleans, Louisiana, in 2013.

Eastern Shipbuilding and Verhaar Omega teamed up to create a new towboat design with thruster propulsion, which is more efficient than conventional nozzle propeller propulsion systems .

Eastern Shipbuilding also worked with engineering firm Gilbert Associates for more than a year to develop the new, hybrid diesel-electric design for the US inland waterways market.

The Thunderbolt was designed in accordance with ABS Class 2014 rules for building and classing steel vessels on rivers and intracoastal waterways, as well as proposed US Coast Guard 46CFR towing vessel rules and IEEE 45 2002 standards.

Propulsion and power for Thunderbolt

The 360º rotatable twin V-Pods, which can rotate 180º in approximately 14 seconds, will enable the vessel to offer enhanced steering manoeuvrability and precision, as well as braking capability. The V-Pods are fitted with VFD-Reversing Induction motors, which produce 1,770HP each.

"The Thunderbolt is designed to push a six-pack of 30,000 barrel tank barges upstream in a high-water current, which requires full power to achieve towing speed. Similarly, it will require less power while transiting downstream. The PMS will automatically shutdown the unnecessary power plants, thus helping to conserve fuel."

The power management system (PMS), to be supplied by Beier Radio, will automatically control the operation of generators. It will autonomously shut-down any generator if less power is required by the vessel, and will also auto-start generators on peak demand.

The Thunderbolt is designed to push a six-pack of 30,000 barrel tank barges upstream in a high-water current, which requires full power to achieve towing speed. Similarly, it will require less power while transiting downstream. The PMS will automatically shutdown the unnecessary power plants, thus helping to conserve fuel.

When the tow is at the port, the vessel can be propelled by auxiliary power supplied by a harbour generator while shutting down the main diesel-electric power plants.

The V-Pods, compared to conventional Z-drives, are of less weight and hence achieve better efficiency at the right-angle gear drive. Further, the entire underwater unit can be removed without dry-docking the vessel, in case of damage being caused to the V-Pods.