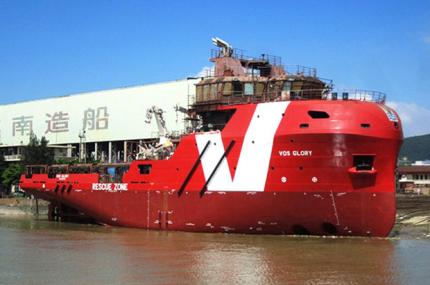 VOS Glory is a new emergency response and rescue vessel / field support vessel (ERRV / FSV) built at Fujian Southeast Shipyard, China, for Netherlands-based shipping company Vroon Offshore Services. The vessel was launched in July 2014 and was delivered to her owner in January 2015.

VOS Glory embarked on her maiden voyage to the UK in February 2015. The British-flagged vessel will be deployed in the North Sea by Vroon Offshore Services Aberdeen.

The vessel is second in the series of four FSVs being built for Vroon at the Chinese Shipyard. Her sister vessel VOS Glamour was delivered in December 2014 and sailed on its maiden voyage to the UK in January 2015. The remaining two vessels are expected to be delivered later in 2015.

Vroon’s new FSV is of Group ‘B’ category designed to rescue up to 300 survivors. It incorporates an innovative, wave-piercing bow design and has an overall length of 60m, beam of 15m and summer draft of 4.6m. The net and gross tonnages of the vessel are 576t and 1,890t respectively. The vessel offers less than 1.75m freeboard at rescue zone.

The main deck has a cargo carrying capacity of 300m3 while the vessel has the capacity to hold 800m3 of water and 600m3 of fuel.
VOS Glory is capable of accommodating 22 crew members within 15 crew cabins onboard. It also offers 66 seats and 26 bunks for survivors.

The vessel is outfitted with two dispersant booms and a dispersant pumping system with a dispersant capacity of 5t for oil spill response and cleanup. She is also equipped to perform towing operations during emergency.

An emergency position-indicating radio beacon (EPIRB) is fitted to alert search and rescue services in case of an emergency. A self-contained, waterproof transponder called search and rescue transponder (SART) is also available onboard for emergency use at sea.
Navigation is supported by radars, global positioning system (GPS) navigator, an echo sounder for measuring underwater physical and biological components, and a avigational Telex (Navtex) for conveying navigational and meteorological warnings, forecasts and urgent marine safety information.

The vessel consumes more than 7t of fuel a day when running at a maximum speed of 14kt. The fuel consumption reduces to 4t per day at 10kt and 1t per day when idling.