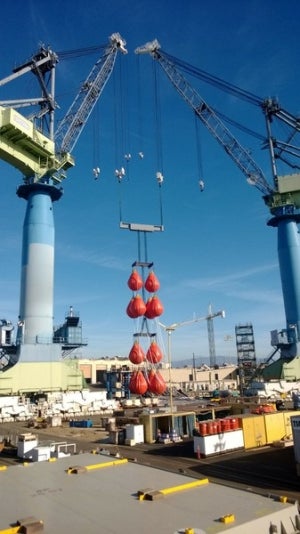 On 22 November 2014, L.A. Maritime performed a 420t load test at the General Dynamics-NASSCO shipyard in San Diego, California, on a NASSCO-built spreader beam designed by Hopper Engineering to lift a main engine into the hull of a new build ECO-class tanker vessel.

Seven weeks of calculations and discussions with NASSCO and Hopper culminated with the building of two H-frames to support the massive test weights, as well as the purchase of 3,000ft of hose to fill the waterbags.

The H-frames were linked one above the other, each rigged to accommodate six bags filled to 35t, for a total of 12 bags (420t). The entire assemblage was attached to the spreader beam.

Then, two cranes working in tandem lifted the spreader bar, the H-frames, and the attached weights a little at a time so each of the four successive layers of waterbags could be filled with sea water evenly and simultaneously to the precisely calibrated weight.

Since beginning business in 2003 by providing service on marine diesel engines, president Dieter Liebich, a master mariner and mechanical engineer, has grown the business to include inspections on lifeboats and davits, general ship repair, sale of spare parts and LSA equipment, crew training, service on marine and offshore cranes, and technical consultation.

If you are assessing the advantages of a ship monitoring system but are put off...

On 19 April 2016, the Samunder Club of Houston will hold its Spring Technical Roundtable,...

L.A. Maritime is pleased to announce its recognition by the American Bureau of Shipping (ABS)...