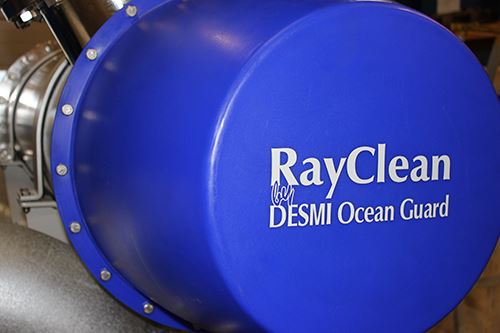 DESMI Ocean Guard A/S is to appeal the US Coast Guard’s decision to reject the Most Probable Number (MPN) method for type-approval testing of ballast water treatment systems (BWTS).

On 14 December 2015, the US Coast Guard (USCG) announced their preliminary decision to not accept the MPN method for the verification of the performance of ballast water treatment systems (BWTS).

DESMI Ocean Guard, together with other manufacturers of UV-based ballast water treatment systems, had in March 2015 submitted a type-approval application to the USCG, where the MPN method had been used to verify the system performance.

However, the USCG has preliminarily determined that MPN conflicts with the USCG rule. The USCG reached this decision, even though the USCG rule itself uses and relies on MPN, and at no point does the USCG even dispute the effectiveness of MPN or the DESMI Ocean Guard system, RayClean™.

We are, like many other BWTS providers and ship-owners, surprised and disappointed with this preliminary decision, and after having carefully reviewed all available data and information together with our legal counsel, we have decided to file an appeal.

We think that USCG’s decision is not right for many reasons, and supported by important legal and scientific facts, we are convinced that the MPN method, which is accepted in the rest of the world, will also become accepted in the US territory.

In an effort with support from worldwide experts from academia and industry, USCG Independent Laboratory’s test facilities and leading manufacturers of UV based BWTS, a website containing important facts about the MPN method has been made available to the public.

The website presents facts, reasons why the USCG must accept the MPN method, expert opinions, and invites stakeholders to become involved and share their opinion with the USCG.

USCG’s reason for rejecting the MPN method is, as we understand it, based on the notion that the MPN method does not measure if an organism is ‘living’, but rather if it is ‘viable. This is not in accordance with the USCG ballast water discharge standard, which the USCG believes requires less than ten living organisms per ml in discharged ballast water. However, on the new website many surprising facts can be found, such as:

Therefore, the MPN method, which determines if an organism can reproduce, meets the USCG Rule, because organisms that cannot reproduce are not invasive species, and they are not living organisms.

We believe the world wants, and needs, energy-efficient and chemical-free ballast water treatment, and this is what is provided by the UV industry today. USCG’s preliminary decision to not allow the use of the MPN method will have serious consequences for ship-owners, their crew and the environment, if not changed.

Ship-owners will have to use chemicals or much more UV power to treat ballast water, which leads to increased operating expenses, risk for increased corrosion and risk for chemical spills and explosions.

The environment will be negatively impacted because USCG’s decision will promote chemical based ballast water treatment, which will lead to a significant increase in discharges of disinfection by-products into the world’s oceans, which is of increasing concern to scientists and regulators.

We urge those affected by this preliminary decision to speak up and take action.

Systems must start up and run reliably and also treat the water in accordance with the IMO and USCG standards.

It is of utmost importance that the crew has been familiarised with water management systems and has enough knowledge to operate and maintain the system.