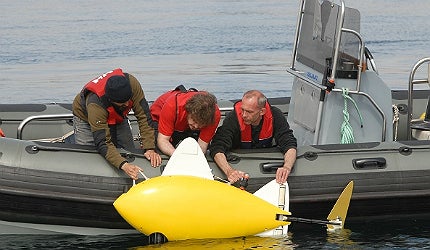 SHOAL is a European research project aiming to revolutionise the detection and monitoring of marine pollutants. The project – partly funded by the EU under the Seventh Framework Programme (FP7) for ICT – is headed up by international design, engineering and risk management consultancy the BMT Group, which principally focuses on energy, the environment, marine risk and insurance, maritime transport and ports and logistics sectors.

“Prior to the SHOAL project, the University of Essex in the UK had already built an advanced robotic fish in 2009.”

Traditional methods of monitoring involve taking water samples and sending them to a laboratory for testing, which can be extremely time-consuming. “This means that remedial action, such as mending a leak, is delayed and pollution continues to make the situation worse,” says project leader Luke Speller.

“Alternatively, a vessel which is causing pollution may continue its journey spreading contaminants the whole way up a coastline. Either scenario is environmentally unacceptable.”

In stark contrast to this, SHOAL allows the detection process to take place in real-time, as Speller notes: “By utilising autonomously controlled fish with in-built chemical sensors to conduct tests in-situ.”

“Further to this, using artificial intelligence, the robotic fish are able to identify a possible leak or pollution source and work together to identify its source, so that the port can take prompt preventative action against the pollution.”

Speller asserts that the design will be of great interest not only to port authorities around the world, but also to water companies, aquariums and anyone else interested in monitoring water quality, while it is envisioned that in the future the robots will be put to work in other aquatic domains such as security, diver monitoring or oceanic search and rescue missions.

Prior to the SHOAL project, the University of Essex in the UK had already built an advanced robotic fish in 2009. This prototype, however, had no other capabilities than its fishlike swimming motion. Now, the SHOAL project has led to five major areas of development:

Managed and developed by BMT in the UK, each fish has been given artificial intelligence to operate both independently and as a swarm. Each individual robotic fish will therefore be able to manage multiple problems, ranging from avoiding obstacles, knowing where to monitor pollution and finding the source of a pollutant, to maintaining communication distance from the other fish and returning to be recharged.

Each individual also has an array of sensors and external information allowing it to navigate the environment. BMT has created a real-time navigation and control system for a team of three robotic fish; they have deployed and created cooperative strategies for the robotic fish team to build a 3D pollution map. Essentially, this means the robotic fish can seek, find, identify and report the precise location of pollutants.

The University of Essex has developed the prototype further by making the fish stronger, more able to survive harsh conditions, more powerful and with a longer battery life. Researchers have also developed the ability to incorporate the all-important intelligence, sensing and localisation technologies from the other project partners.

Also, managing the multiple, conflicting requirements and needs of the different components is crucial. Each partner needs as much space and power as they can get for their system to run optimally, but for the entire system to work these must be kept as minimal as possible.

The Tyndall National Institute in Ireland has developed novel chemical sensor subsystems which have been incorporated into the robotic fish, enabling the onboard analysis of seawater.

“Managed and developed by BMT in the UK, each fish has been given artificial intelligence to operate independently and as a swarm.”

Using these sensors to conduct an electro-analysis of the water, the concentration of an array of contaminants in the water can be accurately calculated.

The chemical sensors can detect heavy metals such as copper, lead and phenols, as well as analyse oxygen levels and salinity to ensure the water represents a healthy environment for wildlife.

Speller points out that it is important to recognise that: “The system has been designed with the ability to use different chemical sensors. Therefore, if other chemical sensors were available for different pollutants, they could easily be used by the system.”

Thales Safare in France has developed a system for allowing underwater localisation and communication. The localisation uses underwater ‘pingers’ to act as the equivalent of satellites in a GPS system, allowing the fish to find their position. An underwater acoustic system allows the fish to ‘talk’ to each other and the port or other land base, therefore relaying pollution information back and forth.

Hydrodynamics: from the lab to the sea

“An underwater acoustic system allows the fish to ‘talk’ to each other and the port or other land base.”

According to Speller, one of the major challenges faced by the project came in preparing the fish for real-world conditions: “Taking robotics from the lab into the harsh, dynamic environment of the sea presents environmental problems that must be faced every day. It makes for difficult planning, with plans having to be revised daily.”

Because of this, another British institution, the University of Strathclyde – where the Ship Stability Research Centre (SSRC) is the world leading centre of excellence on ship safety – investigated environmental effects on the fish to allow a robust control system which takes into account the conditions at sea, including currents, wind and waves.

The fish have a jointed tail and use an oscillatory, fish-like motion to propel themselves through the water.

A weight inside the fish allows them to dive and rise; this is both quieter than propellers and allows for high manoeuvrability.

Specifications of the robo fish

The SHOAL robotic fish project, which officially ended on 30th June 2012, is still in the prototype phase and is still undergoing extensive testing at sea. “After these trials we will have an idea of their capabilities and the changes that need to be made to make them more robust and ready for production,” Speller says.

“This will allow us to create a commercialisation plan and calculate the work required to have them ready for production.”

Powered by rechargeable batteries with a single charge life of eight hours, each fish is 150cm long, 60cm high and 35cm wide and weighs just more than 35kg. The robots are operational to depths of 30m and can travel 15km and back without localisation restrictions, although their range is limited by the one kilometre acoustic range of the ‘pingers’.

While each individual robot currently costs about £20,000 to build, once they are being manufactured on an industrial basis, Speller asserts that economies of scale will apply and unit cost is expected to reduce significantly.

Scientific application: where to from here?

On a final note, Speller adds that there are various robots under development, stating: “Cooperative robots can be useful in anything from search and rescue to exploration activities. BMT is continuing work on underwater intelligence for detecting underwater threats from divers to mines in harbours under the SUPPORT project.”

BMT also hopes to refine the robots’ operational capabilities even further, by developing underwater robotics to not only detect but also start to clean up pollution, starting with algae and oil as two main targets.