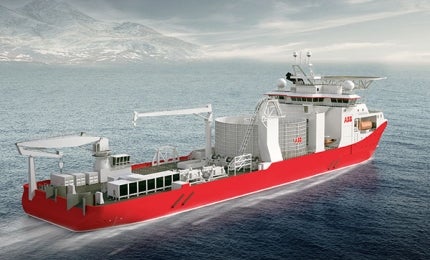 ABB, a leading power and automation technology group, placed an order with Norway-based Kleven Verft (Kleven shipyard) for the world’s most advanced cable laying vessel (CLV), in September 2015. The vessel will be based on the SALT 306 CLV design from Salt Ship Design.

The new CLV will enhance the capacity of ABB’s submersible cable operations, while delivering optimum efficiency and accuracy. The vessel will be built at Kleven shipyard located in Ulsteinvik and will be delivered to the owner in 2017.

The mono-hull vessel will feature a bulbous bow design for reduced drag and ensuring higher speed, range and fuel-efficiency. The forward hull will house the helipad, wheel house and accommodation units, whereas cable laying systems will be positioned in the middle and aft of the ship.

The new vessel will be custom-built according to ABB’s specifications and will measure approximately 140m-long and 30m-wide. It will incorporate state-of-the-art ABB technologies such as onboard DC grid and power distribution system, and integrated automation system (IAS).

Salt Ship Design will offer a comprehensive design and engineering package for the new vessel, whereas MAATS Tech will perform the integration of the cable-lay mission equipment into the vessel.

The domestic suppliers from the marine zone on the Norwegian north-west coast, including Brunvoll, Hareid Group and ABB Marine, will also contribute to the development of the vessel.

The CLV will be outfitted with a carousel accompanied by a spooling system to handle flexible pipe, umbilicals and power cables. The spooling system with an articulated boom arm will lead the cable in and out of the carousel. The hydraulically powered system can be remotely controlled by an operator in a control cabin. The onboard carnage will support the handling of offshore equipment and cargoes.

"The new CLV will enhance the capacity of ABB’s submersible cable operations, while delivering optimum efficiency and accuracy."

The vessel will be equipped with roll-reduction tanks. The subsea missions will be performed and monitored by a remotely-operated vehicle (ROV), which will employ cameras and sonar, eliminating the need for divers. The ship will also carry life-saving boats and equipment.

The onboard DP3 class dynamic positioning system will allow the vessel to maintain its position with a high level of accuracy. The ship is built with features to control fire and flooding and will meet the highest standards for safety. It is expected to set a new benchmark for reliability and accuracy.

The sensors, and monitoring hardware and software aboard the vessel will ensure the transfer of data to shore through a satellite link. This will allow the land-based technical support centres to function with the vessel as part of integrated marine operations solution from ABB. The vessel will also integrate modern advisory software for supervising the manoeuvring, forecasting and decision support.

The propulsion system will integrate three ABB Azipod propulsion units. The vessel will also be fitted with three tunnel thrusters supplied by Brunvoll.

The ABB IAS in combination with an energy storage system will reduce fuel consumption by 27% and minimise maintenance compared to conventional AC systems.

The DC grid and power distribution system aboard the CLV will employ a single DC circuit for the propulsion to reduce the power utilisation.