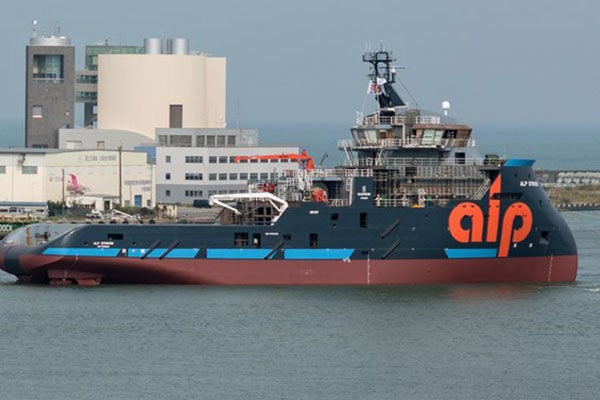 The tugs are being built by Niigata Shipbuilding & Repair for ALP Maritime Services (ALP), a subsidiary of Teekay Offshore Partners, and are based on the SX157 design from Ulstein Design & Solutions.

In March 2014, Ulstein was contracted by Niigata for the design and equipment package for four ALP Future Class AHTs.

The first of four vessels, ALP Striker, was launched at Niigata shipyard in October 2015. It is scheduled to be delivered in the first quarter of 2016.

The deck is fitted with a Rolls Royce SL400-3T towing winch, three drums, storage reels, a fibre-rope storage drum and two cable lifters. The winch on the towing drum’s first layer has a holding load of 675t.

The Future Class offers 27 single cabins for officers and crew members. Also included are 35 berths, a provision room, a vegetable room, a meat room, and entertainment facilities for crew and officers onboard.

Power is supplied by three 940ekW auxiliary generator sets and one 200ekW emergency generator set. The propulsion system provides a bollard pull of 306t and a maximum speed of 19k.

The vessel has a fuel capacity of 3,500t. This allows it to sail non-stop towing voyages across the Atlantic, Indian or Pacific Oceans for up to 45 days, without refuelling.