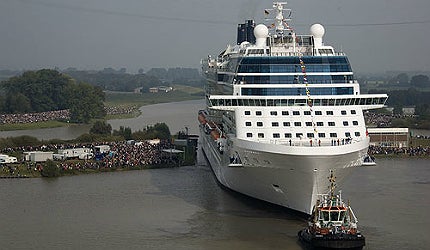 The ship is owned by the Royal Caribbean Cruises and operated by Celebrity Cruises. It was built by Meyer Werft at the Papenburg shipyard in Germany at a cost of $750m. The ship was christened in November 2008 at Port Everglades in the US.

Design of the cruise ship

Optimised by computer calculations and model tank tests, the ship’s design was developed in close cooperation with the owner. The ship is capable of accommodating 2,850 passengers in 1,425 cabins and is served by 1,271crew members. It has a gross tonnage of 122,000t.

About 90% of the 1,425 passenger cabins are outside cabins built with balconies. A few interesting features of the ship are the Lawn Club, which has a natural lawn, and the Corning Museum of Glass, which demonstrates the art of glass blowing.

Construction of the Celebrity Solstice

“The ship is owned by the Royal Caribbean Cruises and operated by Celebrity Cruises.”

Celebrity Solstice is an eco-friendly ship, built using energy-efficient components such as a photovoltaic system, optimised hydrodynamics, underwater coating and an energy-saving lighting system. These components help the ship save up to 30% of its energy compared with previous ships.

Safety onboard has been ensured by state-of-the-art stage technology, interactive communication systems and complex alarm and safety systems. The engine room is equipped with fire safety systems.

The vessel, which is capable of cruising at the speed of 24kt, is installed with four Wartsila diesel engines, two 20.5MW Azipod azimuth thrusters and pod propulsion systems. The overall engine output of the ship is 67,200kW and propulsion power is 41,000kW

Facilities onboard the Solstice-Class cruiser

The main dining room of the ship, Grand Epernay, is located at the aft end. The room is furnished with a two-storey glass wine tower and serves world and continental cuisine. The Celebrity Select dining option enables the passengers to dine any time between 6:30pm and 9pm.

“Delivered in October 2008, Celebrity Solstice was the largest cruise ship ever built in Germany until 2009.”

Celebrity Tastings and Cellar Masters host samplings of wine and other drinks, such as single malt, Irish whiskies, Port wine and rums.

The Solstice theatre is a venue for live performances, production shows, musical arrangements and comedy shows. Quasar Night Club is meant for adults of all ages. Guests can participate in a game of luck and chance at Fortunes Casino, fitted with 16 gaming tables. Magic shows for children are performed at Fun Factory.

The Elemis Spa offers massage and acupuncture treatments while The Persian Garden, a spa and fitness centre, provides a sauna and steam room, tropical rain shower and heated ocean-view relaxation chairs.
The main pool area of the ship consists of a family pool, the Sports Pool and Wet Zone. The ship also has a bocce court, three-hole putting course and a basketball court.

The Penthouse Suite, built in an area of 1,291 square feet, includes a veranda of 389 square feet. The suite is furnished with floor-to-ceiling sliding glass doors and has a separate living room with dining area.

The Royal Suite is built in an area of 590 square feet and has a veranda built over an area of 158 square feet. The suite has a separate living room with dining area.

The Celebrity Suite offers separate living room and bedroom. Fitted with sliding glass doors, the suite is furnished with sectional queen sleeper sofa, vanity, lounge seating and a mini refrigerator. The total area, including the veranda of the suite, is 499 square feet.

The Sky Suite, fitted with floor-to-ceiling sliding glass doors, is built over an area of 300 square feet. Its veranda covers an area of 79 square feet.

Celebrity Silhouette is the fourth of five cruise ships in the Solstice-class operated by Celebrity Cruises.

Celebrity Reflection is a Solstice-Class cruise ship owned and operated by the US cruise operator Celebrity Cruises, an affiliate of Royal Caribbean International.