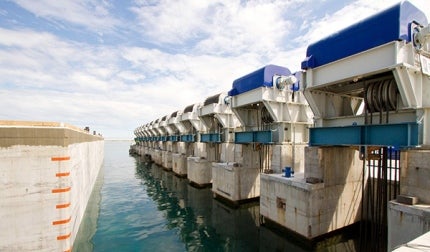 Damen Shipyards Sharjah (DSS) is located at the Sharjah Hamriyah free-zone, UAE. The shipyard construction took less than three years, operations were started in 2011 and official inauguration took place in January 2014. It provides easy access to all seven Emirates and brings the neighbouring Gulf States closer to the Straits of Hormuz.

DSS is jointly owned and operated by Netherlands’ Damen Shipyards and Dubai’s Albwardy Marine Engineering. DSS performs its activities with the help of core competencies of Damen’s new-builds and Albwardy’s conversions, dry-dockings and repairs.

Services offered by the shipyard include ship building, repair, conversion and lifting, as well as repairs, maintenance and construction of rigs, platforms and offshore structures.

DSS is spread over an area of 284,000m² and has direct and unrestricted access to the sea. It has a quay measuring 1,200m in length and draught varying from five metres to nine metres.

Port Canaveral in Brevard County, Florida, is the second busiest cruise port in the world.

Facilities for ship construction include a new hall measuring 130m long and 34m wide. Covered workshops spread over an area of 7,000m². The new-build construction sheds cover an overall area of 4,500m².

Iv-Consult was contracted to develop a master plan, as well as design and engineer the civil works for the shipyard. The civil works primarily comprised the retaining structures around the ship lift, the deeper part of the sideways transfer system and the foundations for cranes and buildings.

"The shipyard construction took less than three years, operations were started in 2011 and official inauguration took place in January 2014."

Dutco Balfour Beatty (DBB) constructed the steel buildings, site utilities and other ancillary shipyard facilities in two phases. The contracts for each phase were worth $18.4m. The design and construction of the shipyard’s office building was carried out by Haskoning Netherland.

Gantrex, a company based in the UAE, undertook the overall logistical operations during the construction phase. It installed 9,500m of rails including drilling, levelling, grouting, aligning and rail welding works on a turnkey basis. Gantrex also installed 500m of rails on the Rolls-Royce shiplift platform and another 400m of rails on the transfer carriage side.

Rolls-Royce received a contract to supply Syncrolift ship lifts to DSS in August 2011. Two QuayQuip wheel fenders were installed in 2012.