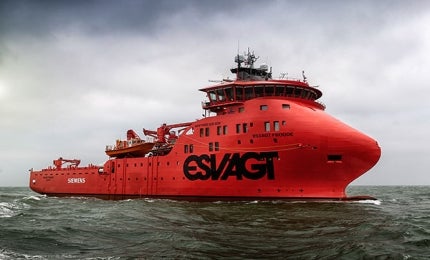 The vessel was christened and transported to her owner in February 2015. Esvagt Faraday, the sister ship, was also delivered in February 2015.Esvagt Froude has been chartered to Siemens Energy for five years to transport cargo and crew for the construction and operation of the Baltic II offshore wind farm.

In addition, a ten-year contract for operations at the Butendiek offshore wind farm in Germany has been agreed. Both include an option for extension.

Esvagt also placed an order for a third Havyard 832 SOV, Esvagt Njord, in December 2014 for operations at the Dudgeon wind farm, which is being developed by Statoil and Statkraft off the coast of Norfolk, UK. The vessel was delivered in August 2016.

"The Havyard 832 SOV was designed and engineered by Havyard Design & Solutions."

The Havyard 832 SOV was designed and engineered by Havyard Design & Solutions. Its overall length is 83.7m, moulded breadth is 17.6m and maximum draught is 6.5m. The deadweight is approximately 4,200t at maximum draught.

With a deck area of up to 900m², the SOV provides 450m² of deck space to contain workshop facilities and six 20ft containers for spare parts.

Esvagt Froude features an Ampelmann A-type gangway, which is a walk-to-work offshore access system. The gangway allows the on-board technicians to reach wind turbines through a hydraulically stabilised asymmetric bridge, even during wave heights up to 2.5m. It has an active and passive roll damping system for improved comfort and gangway operations.

The vessel can be placed close to the wind turbines for easy and safe operations. The state-of-the-art dynamic positioning (DP) system provides enhanced manoeuvrability during the servicing of wind farms. Froude’s high ERN-score (station-keeping capability) allows for operations even in severe climatic conditions.

Esvagt Froude is fitted with a deck crane having a capacity to carry 2t at 12m outreach, and a boat landing ramp at aft to launch a safe transport boat (STB) 12A or catamaran transfer vessels.

Additional facilities include an incinerator and compactor for waste management and a closed-circuit television (CCTV) for monitoring the central areas of operation and the vessel.

Esvagt Froude has 60 single-bed cabins for 40 technicians and 20 crew members. The accommodation facilities, including modern cabins, meeting rooms, fitness area and entertainment areas, are located in the superstructure.

The Walk-to-Work gangway system is complemented by STBs, developed at Esvagt’s headquarters in Esbjerg.

A standard Esvagt fast rescue boat is positioned on the deck.

"Esvagt Froude is powered by a diesel-electric propulsion system."

Esvagt Froude is powered by a diesel-electric propulsion system and an advanced DC power system developed by Siemens, Trondheim, Norway.

The power-plant enables fuel and energy efficiency while providing additional comfort to the crew. The vessel is also fitted with Siemens Blue Drive propulsions system which reduces fuel and CO2 emissions.