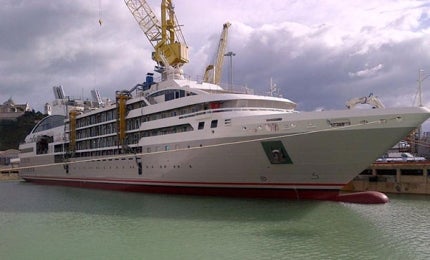 Le Lyrial is the last in the series of Ponant’s four super-luxury sister-ships. The new ship was delivered on 11 April 2015.

Fincantieri was awarded the construction contract for Le Lyrial in July 2013, the vessel’s keel was laid in May 2014 and the launching ceremony was held at Fincantieri’s Ancona shipyard, Italy, in October 2014. The interior designer for the cruise ship was the architect Jean-Philippe Nuel.

The small-sized vessel resembles a mega yacht, and is capable of reaching ports and destinations inaccessible to larger cruise vessels, and touts of a light hull, a narrow bow, sleek lines, in addition to contemporary technologies and interior designs.

Inspired by the proposed destinations, the interiors are given a colour scheme integrating grey-blue and turquoise blue to blend with the Polar ice and the Mediterranean Sea respectively, and blue light to suit the future pole star Vega, the principal star in the northern hemisphere’s Lyra constellation. The ship’s name has a reference to the latter.

The vessel is classed by Bureau Veritas and has been awarded the Ice class, for navigation in polar and sub-polar regions, and the Green Ship label for its dynamic positioning system, electric propulsion, energy-efficient engines, onboard waste and sewage treatment plant, low-energy lighting system and low-exhaust emissions. It has also been awarded the Comfort-class label for generating low levels of vibration and noise.

The ship is equipped with its own fleet of Zodiac Mark V heavy-duty (HD) work boats.

Costa Diadema (also known as Costa Tiara) is a new cruise ship built by Fincantieri at its Marghera shipyard in Venice.

The number of suites and staterooms can be configured flexibly by varying their sizes.

The ship offers two restaurants, a refined gastronomical restaurant named Marina on Deck 2 that serves French cuisine and the Grill Restaurant on Deck 6, which opens up to the pool area.

Other public areas include the Wellbeing Centre integrating a spa, a fitness room, a hair salon and experts and products from the French cosmetic house SOTHYS™, the panoramic terrace on Deck 6, the leisure area on Deck 5, internet area on Deck 6, the theatre on Deck 4, the main lounge on Deck 3 integrating a shop, a reception desk and an excursion desk, the medical centre on Deck 3, two indoor bars on Decks 3 and 5, and an open bar and library on Deck 6.

The super-luxury cruise ship is equipped with two electric motors with an output of 2,300kW each and diesel engines with an installed capacity of 7,200kW, using less heavy and less polluting marine diesel oil (MDO). The propulsion provides the vessel a cruising speed of 14kt.