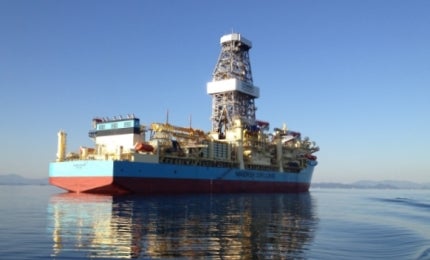 The naming ceremony of Maersk Voyager was held in September 2014 and delivered was made in February 2015.

Maersk Drilling received a 3.5-year charter contract from Eni Ghana Exploration and Production for Maersk Voyager in March 2015. The $545m contract also includes an option to extend the charter by one year. The vessel, bearing the Singaporean flag, will be deployed at the Offshore Cape Three Points (OCTP) Project in offshore Ghana in July 2015.

The design integrates a dual derrick, and wide subsea work and storage areas. It is designed to allow effective construction and site development activities through parallel and offline processes.

The ship features a DP-3 dynamic positioning system (DPS). The redundant critical systems enable normal maintenance with no or partial impact on the safety and efficiency of the work.

“It is designed to allow effective construction and site development activities through parallel and offline processes.”

The onboard multi-machine control (MMC) computerised control system along with remotely operated dual pipe handling system allow all standard operations without any workforce on the drill floor. The vessel is also fitted with a large mud storage capacity, riser inspection / maintenance basket and a gas handler.

The rig is equipped with 90ft-long MR 6H-SE riser joints rated for a water depth of 12,000ft for efficient marine rise and the blowout preventer (BOP) running. The tensioning system comprises eight dual wire line tensioners with a full top tension of 3.6Mlb.

Norshore Atlantic is a multi-purpose drilling vessel built at the Batam Shipyard in Indonesia by Singapore company Otto Marine.

The drilling ship also features a tubular handling system and an updated power management system with power blackout recovery configuration for recovery in less than 10s.

Maersk Voyager offers accommodation for 230 personnel in one-man and two-man cabins. Additional facilities include a canteen, galley, change rooms, recreation rooms, offices and a cinema. Sleeping areas aboard the ship are designed to improve the crew’s working conditions.

Inexa TNF has more than 40 years' experience of supplying...

Guardian Maritime design and manufacture the GUARDIAN anti-piracy measure for...

Q&A: Moving away from one-to-one communication systems in shipping

Q&A: the green potential of wind propulsion with BAR Technologies

Navigating the oceans with help from AI: Q&A with Orca AI

Neptune Declaration: has anything changed for stranded seafarers?

Maritime security and piracy: lessons from the ICS

The Carnival Magic is the second cruise ship in Carnival Cruise Lines’ Dream Class. It is the sister ship of…

Regal Princess is the latest cruise ship in the Princess Cruises fleet owned by the Carnival Group. The vessel is…

Brilliance of the Seas