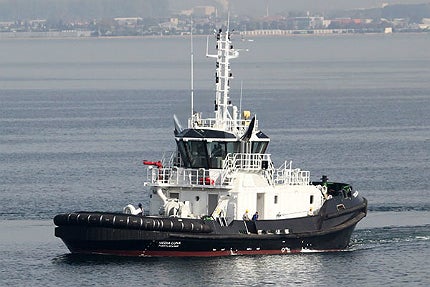 The vessel was delivered to its owner Cerrejón in January 2013, followed by the delivery of its sister vessel Cabo de la Vela in March 2013.

Cerrejón ordered for Media Luna to replace the Riohacha as part of the company’s fleet renewal programme. The new vessel was constructed by Uzmar at its Uzmar Tug and Work Boat Factory, located in Izmit, Turkey.

Media Luna and its sister vessel are the two most powerful tugboats in the fleet, designed for a bollard pull of 63.1t. The vessel is capable of handling freighters of up to 180,000t. It was designed and constructed to BV Class requirements and carries BV 1, X HULL, X MACH, TUG, Unrestricted Service class notations.

"The vessel was delivered to its owner Cerrejón in January 2013, followed by the delivery of its sister vessel."

The wheelhouse of the vessel is fitted with frameless bonded windows to avert window mullion obstruction. The vessel features a single split control station enhancing visibility for both ahead and astern operation and over the aft working deck.

The vessel is capable of operating in rough weather conditions for which the vessel’s foscle has been slightly raised. The tugboat features a pilot boarding platform at the bridge deck level. The workshop and stores area is located on the vessel’s aft hold.

"Cerrejón ordered for Media Luna to replace the Riohacha as part of the company’s fleet renewal programme."

A Rolls Royce AW20.5U2H anchor windlass comprising of two cable lifters and two horizontal warping heads is fitted in the foredeck of the vessel.

The tugboat is equipped with an independent FIFI Caterpillar C18 546kW pumpset capable of delivering sea water at 1,200m³ per hour.

The vessel comprises of an upper row of cylindrical fender measuring 800mm in diameter and a lower course of W-fender at the stern. Sheer handling fenders consists of 300mm D- rubber and a 300mm "W" block type fendering fitted at the bow. The stern fendering incorporates a fender spray lubrication system operated from the wheelhouse.

The vessel is propelled by a Voith Schneider 30R5-250 cycloidal propeller driven by two GE 12V228 diesel engines, each rated 2289kW at 1,050rpm. The vessel is further equipped with two auxiliary Caterpillar C 6.6 ACERT diesel gensets with an output of 125kW each. The vessel sails at a speed of 13.6kt.