Magellan was launched in March 2015 from the London Cruise Terminal in Tilbury.
The Magellan holiday cruise-ship has nine decks.
The ship’s maiden cruise began in March 2015.
MS Magellan features 15 categories of cabins and suites.
The cabins in MS Magellan are equipped with a flat-screen televisions.
Comfortable lounge areas along the mall on the Magellan deck.
Air conditioned cabins in MS Magellan offer private en-suite facilities.
Ocean view from the Magellan cruise ship.
The cabins feature Jacuzzi bath and shower. 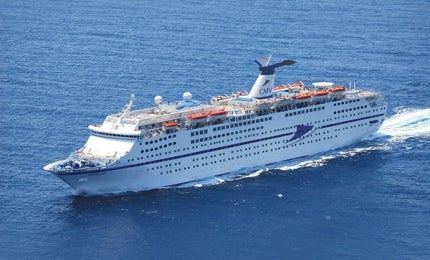 Magellan was first introduced in 1985 as Carnival Cruise Lines’ Holiday cruise ship and became one of the most significant ships in Carnival’s fleet. It was built at Danish shipyard Aalborg Værft and later transferred to Iberocrucero, the Spanish subsidiary of Carnival, who renamed it as Grand Holiday. The vessel underwent a major refurbishment to become a sophisticated European cruise ship and was finally acquired by CMV’s majority shareholder Global Maritime Group in 2014.

The maiden voyage of the ship took place on 15 March 2015 and included a 12-night cruise from London Tilbury to the Faroe Islands and Iceland.

"The vessel underwent a major refurbishment to become a sophisticated European cruise ship and was finally acquired by CMV’s majority shareholder Global Maritime Group in 2014."

Upon boarding the ship, the passengers are guided to two main stairwells and a centre light sculpture illuminating the glazed ceiling that gives an impression of spacious interiors.

The ship features wide corridors and liberal deck areas with wood-type decking. Lounges and panoramic seating are arranged at a number of places to completely experience the scenic cruise programme.

Many changes have been made to enhance the facilities of the ship, including the new CMV livery, but the iconic-shaped funnel gull wings remained the same. The gull wings are intended to stop smoke from falling on decks in the centre and aft when sailing with a following wind.

Accommodation onboard the oceangoing cruise ship

Dining and entertainment facilities onboard Magellan

Dining facilities aboard the vessel include Waldorf and Kensington restaurants with two-sitting dining or the more informal Raffles Bistro style. These restaurants serve full English breakfast, a five-course lunch and a delightful dinner.

Entertainment facilities on the vessel include new additions programme, laugh on the ocean, guest speeches and CMV club class, which allows passengers to play games such as bridge, backgammon and chess.

Upon completion of its maiden voyage, Magellan will start a summer programme in which it will visit Norway’s Fjordland, the North Cape, Scandinavian Cities, the UK, Iceland, Baltic Cities, St Petersburg and the Canary Islands. In late 2015-early 2016, Magellan will sail to warmer climatic zones, including the West Indies, Canary Islands and Madeira, and the Amazon.