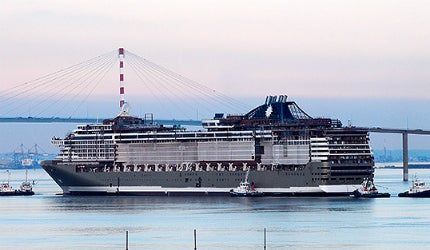 MSC Preziosa, constructed at the STX shipyard in St. Nazaire, France, was delivered in March 2013. It is the 13th cruise ship of MSC Cruises and fourth ship in the Fantasia Class. The other three ships in the class include MSC Fantasia, MSC Splendida and MSC Divina.

MSC Preziosa is the sister ship to MSC Divina, which was christened in May 2012 and bears almost the same features with it. MSC Preziosa made its maiden voyage from St. Nazaire to Genoa. It has two propellers and cruises at a speed of 23.7kts.

With the inclusion of MSC Preziosa, the overall berth capacity owned by MSC Cruises increased to 40,000.

"With the inclusion of MSC Preziosa, the overall berth capacity owned by MSC Cruises increased to 40,000."

Construction of the MSC Preziosa cruise ship began in 2010 under the ownership of General National Maritime Transport Corporation (GNMTC). It was being built for Hannibal Gaddafi, who wanted a cruise ship built exclusively for himself and his family. The Libyan Civil war in 2011, which led to the fall of Gaddafi’s rule, saw STX France calling off the contract and selling the cruise ship to MSC Cruise for €550m in March 2012.

The ship was planned to incorporate a tank hosting six sharks. It was named Phoenicia under the ownership of GNMTC.

The ship has undergone rigorous construction procedure to meet the design standards demanded by MSC Cruises. Interiors of the ship were designed by De Jorio Design International.

Design and facilities of the Italian ship

Accommodation of the Fantasia-Class vessel

MSC Yacht Club is a major attraction of MSC Preziosa, as well as the other three ships in the Fantasia-Class. It is a luxurious accommodation designed with the ‘ship within a ship’ concept to offer privacy to guests.

Passengers staying at the 69 MSC Yacht Club suites will be provided with a private mini bar, a private restaurant, solarium, hydro-massage pools and an observation lounge fully walled with glass.

The rooms are furnished with facilities including a double bed, internet facility, interactive TV, telephone, marble bathroom, personal safe and many more. They are further provided with 24-hour butler service providing assistance on areas, such as check-in, luggage and transport.

MSC Splendida, owned by MSC Cruises, is the company’s most innovative cruise ship.

The cruise ship features an advanced wastewater treatment system (AWT). The wastewater from the ship undergoes several treatment stages, such as pre-treatment, bio-degradation, flocculation, filtration and UV disinfection. The sludge from the AWT system is then burned in incinerators, along with the de-watered food waste.