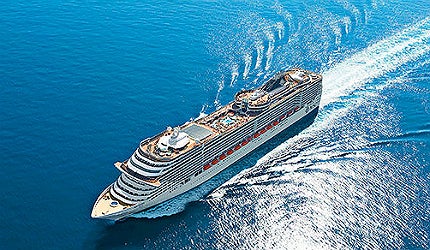 MSC Divina is the third ship in the Fantasia Class series, owned and operated by the Mediterranean Shipping Company’s subsidiary and Italian cruise ship operator MSC Cruises. Introduced in May 2012, she is the newest and the largest in the class, sistering MSC Fantasia (2008) and MSC Splendida (2009).

MSC Divina was delivered to MSC Cruises on 19th May 2012. She was officially baptised on 26th May in Marseille, France, by the Oscar-winning Italian actress Sophia Loren. The vessel embarked on her maiden voyage the next day.

The ship was built by STX Europe at its Saint-Nazaire shipyard in western France. Naval architect De Jorio Design International was responsible for designing and outfitting the vessel’s interior areas.

Construction of the Fantasia Class vessel

"MSC Divina was delivered to MSC Cruises on 19th May 2012. She was officially baptised on 26th May in Marseille, France, by the Oscar-winning Italian actress Sophia Loren."

Construction of the new Fantasia Class cruise ship was announced in July 2010 with STX France as the builder. The new build was originally planned to be named MSC Fantastica.

She was renamed MSC Divina during the vessel’s keel laying ceremony held at Saint-Nazaire shipyard in November 2010. The renaming was done to honour the ship’s godmother Sophia Loren’s desire to have a ship named after her.

In September 2011, the ship was drifted out of STX France’s dry dock B and shifted to the next dock for the final phase of her construction. Initial sea trials were completed in April 2012 and the official ship delivery took place two months later.

The ship was constructed by using the block construction method, which involves welding pre-fabricated hull components together to form a mega-block. A total of 80 such blocks were used to form the body of the vessel.

Approximately 30,000t of steel, about 185 miles of piping and 1,118 miles of electric cables have been used to assemble the ship. Total number of light points available on the ship is 66,000.

MSC Divina is the most advanced of the three Fantasia Class cruise ships. Some of the main enhancements made to the new ship include redesigned interiors, 100 extra cabins and a few new features, such as the Infinity Pool in the aft and two additional elevators to improve passenger flow.

The decks and restaurants have entirely been restyled to offer greater comfort and to achieve maximum space ratio for each passenger.

Technical modifications made to the new ship include more powerful propulsion motors, modern alternators and modern HVAC (heating, ventilation and air conditioning) chillers. The ship is installed with a new reverse osmosis system which produces fresh water at 40% less power.

There are 14 passenger decks and all of them are named after ancient Greek gods. MSC Divina is capable of accommodating 4,363 passengers in 1,751 staterooms, 80% of which have an ocean view. About 95% of the ocean view staterooms have a veranda. There are four different types of suites onboard the vessel.

"She was renamed MSC Divina during the vessel’s keel laying ceremony held at Saint-Nazaire shipyard in November 2010."

There are many other types of cabins, such as balcony cabins, ocean view cabins, inside cabins and cabins for people with disabilities.

All rooms are furnished with a double bed which can be converted into two single beds. Standard amenities include a wardrobe, bathroom with shower / tub, an interactive television, mini bar, safe and air conditioning.

Public spaces onboard MSC Divina are spread across 30,000 square metres. Public venues include seven restaurants, 20 bars and lounges, four swimming pools, a bowling alley and a gymnasium. The MSC Aurea Spa, located on deck 14, offers 21 kinds of massage and eight types of facials.

Black Crab is the liner’s main dining room. It is split over two decks and offers dishes ranging from a traditional Mediterranean menu to international recipes.

Pantheon Theatre, which can accommodate 1,600 guests, is the main entertainment venue. MSC Sports Arena offers sports such as basketball, volleyball and tennis. It is also installed with a 235m jogging track. A Smurf-themed play area, located on deck 15, is a dedicated area for children.