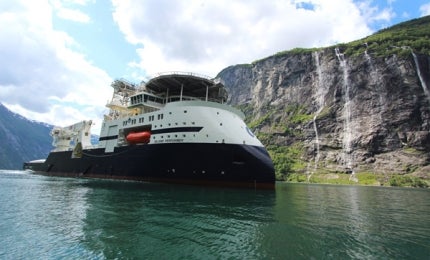 MV Island Performer is a multifunctional offshore vessel built at the Ulstein Verft shipyard in Norway for Island Offshore and its American partner Edison Chouest Offshore, who ordered the vessel in December 2012. The vessel was delivered in July 2014, following a naming ceremony held in the Geiranger fjord in June 2014.

FTO, a joint-venture (JV) between FMC Technologies, Edison Chouest Offshore and Island Offshore will operate the subsea vessel in the Gulf of Mexico for the first five years.

Island Performer features an advanced Ulstein X-bow design of type SX121. Its overall length is 130m, moulded breadth is 25m, depth to main deck is 10m and scantling draught is 7.6m, while the length between perpendiculars is 122.1m.

With a deadweight of 7,300t, the vessel has a mounted intervention tower capable of carrying a deck load of 3,900t. Its freeboard height to main deck is 2.4m and to shelter deck is 5.35m. The gross tonnage capacity of the vessel is 12,983t and the net tonnage capacity is 3,895t.

Island Performer has a capacity to hold 2,084m³ of fuel, 1,077m³ of fresh water, 6,581m³ of ballast water, 443m³ of Mono Ethylene glycol (MEG), 156m³ of sewage and 130m³ of urea. It is also equipped with three heeling tanks for crane operations and three reversible propeller pumps, each with a capacity of 800m³/h and a delivery height of 15m of head water column (mWC).

24 watertight sliding doors are installed onboard, which prevent water from entering the control cabinet.

A helicopter deck also features, with 26.1m diameter, 20 corners and a maximum take-off weight of 12.8t.

A 13-person elevator is installed onboard, with eight stops and a maximum capacity of 1,000kg.

Island Performer is equipped with a 250t active heave compensated (AHC) offshore pedestal crane with the main winch on the tank top, providing access to depths up to 3,000m with a safe working load (SWL) of 250t at 14m outreach at subsea level and a SWL of 83t at a maximum outreach of 36m at subsea AHC.

An auxiliary winch AHC is installed with a capacity of 20t at maximum outreach of 40m, providing access to depths up to 500m.

Deck equipment includes a module handling tower (MHT) with separate stair tower, with a lifting capacity of 29m at SWL of 300t.

Safety equipment onboard includes a fire and gas detection system and an emergency shutdown (ESD) system with 1,200 I/O Compliance with Offshore Standard DNV-OS-A101, Ch. 5. Two enclosed lifeboats with davits on both sides of the ship can each accommodate up to 130 people. The vessel also features three life rafts with davits capable of carrying 25 people on each side, as well as two man overboard (MOB) boats with one-armed davits capable of carrying approximately 12 people.

Fire-fighting facilities include a stand-alone addressable fire-detection system, low-pressure water mist total flooding system for engine and switchboard rooms, and a local protection system. The vessel is also fitted with an extensive camera and monitoring system.

Sanitary supply and discharge systems onboard include UV sterlisers, a vacuum sewage plant and a sewage treatment plant adhering to USCG guidelines.

Electrical equipment, such as main switchboards and emergency switchboards, were all delivered by Ulstein.

Powering the vessel is a diesel electric power and propulsion plant, which is equipped with six main generator engines, each of MCR 2,880kW with a power of 2,740eKW at 900rpm. The main engines are installed with selective catalytic reduction (SCR) catalysts.

Island Performer’s propulsion system includes three main azimuth fixed pitch propeller (FPP) thrusters with nozzles each with a diameter of 3,200mm and a power of 3,000kW. The vessel is also fitted with a controlled frequency converter, which helps the three electric propulsion motors generate a maximum of 3,000ekW power each at 1,200rpm. In addition, an emergency generator of 450ekW is provided.

This propulsion system allows the vessel to cruise at a maximum speed of 15.25k.