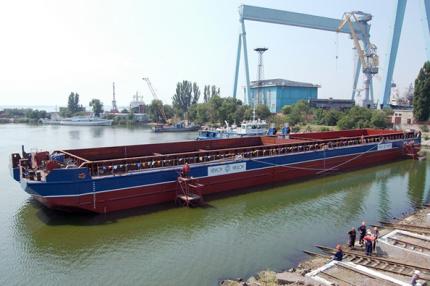 The non-self-propelled vessels (NBL-91 project) are a series of 12 barges being built by NIBULON shipbuilding and repair yard, which is based in Ukraine. The vessels are intended to transport cargoes along the Southern Bug and other shallow rivers in Ukraine.

The construction of NBL-91 project non-self-propelled vessels is a part of NIBULON’s investment programme to develop a new logistics system that will revitalise the Southern Bug inland waterway. NIBULON also plans to build 12 shallow-draft pusher tugs and 35 Volga-Don Max Class self-propelled vessels to support its inland water transport services across Dnieper, Southern Bug, Desna and other rivers in Ukraine.

The NBL91 non-self-propelled vessel was designed by POSS Torola. It is based on its predecessor, NBL90. The detailed design documentation of POSS-120 and NBL-91 Projects was handed over to The Shipping Register of Ukraine in March 2011.

The M/T Stolt Sagaland is the latest addition to the fleet of Stolt-Nielsen, a Dutch shipping company based in Rotterdam.

The primary painting and assembling of deck and electrical equipment of the first vessel were successfully completed prior to its launch in August 2015. The second vessel is expected to be lunched in the second half of 2015.

"The second vessel is expected to be lunched in the second half of 2015."

Design and features of the non-self-propelled vessels

The advanced design offers an eased hatchway cover and smaller draft. The vessel integrates simplified hull lines without superstructure and propulsion gear. The hull structures comply with the MAKO 47-2 (2004) standard. The main hull is made of Grade A and D carbon shipbuilding steel.

The shipbuilding steel, which is used to construct the hull, is produced under the supervision of the Shipping Register of Ukraine and meets the regulations of the authority.

The vessel is designed to transport general and bulk cargoes. Two cargo holds are fitted with lighter hatches for easy loading and off-loading of cargo to/from the vessel.

"The vessel is designed to transport general and bulk cargoes."

The non-self-propelled vessel will be accompanied by the POSS-120 Pushtug designed by POSS Torola. The single-deck tug is powered by two high-speed non-reversible four-stroke diesel engines, which develop a maximum continuous power of 438kW each. The engines drive two full rudder-propellers through a twin-shaft.

The POSS-120 tug has a length of 18m, breadth of 8.3m and draught of 1.5m. The Pushtug supports mooring missions and can push or tow non-propelled vessels or group of barges or floating structures. It will function as a harbour tug and will also be capable of breaking ice in winter.

The 1,000hp-class inland tug also performs operations in the reservoirs and at the passages of the locks. It can tow independent non-self-propelled vessels at an average speed of 4kt. The vessel has a maximum endurance of five days.