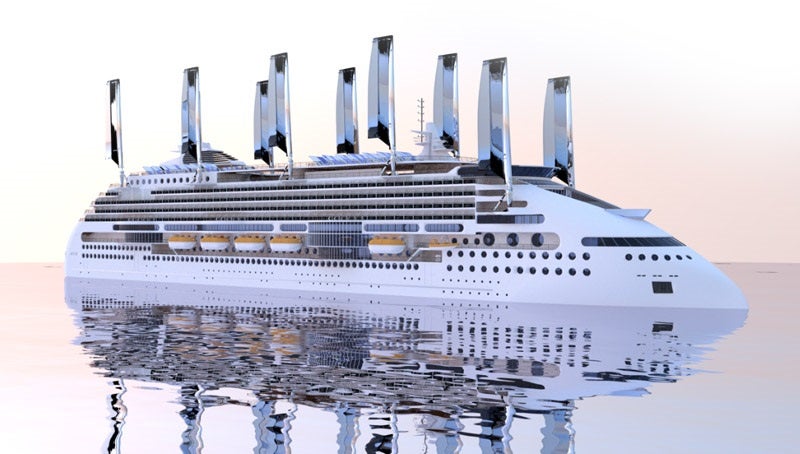 The Ecoship concept was revealed by the company in December 2015 at the 21st Conference of the Parties to the United Nations Framework Convention on Climate Change, in Paris, France. The maiden voyage of the vessel is expected in 2020. Once built, the ship is expected to be the world’s first ten-mast cruise liner.

The ship is expected to carry approximately 5,000 people a year while hosting exhibitions on green technology in up to 80 ports each year. It will also be capable of serving as a floating sustainability laboratory, helping in research related to ocean, climate and green marine technology.

Claimed to be the world’s greenest cruise ship, the Ecoship has been innovatively designed by Oliver Design. The aerodynamic hull of the 55,000t environment-friendly vessel is inspired by the humpback whale. The non-toxic and anti-fouling coating of the hull is similar to a fish’s skin.

The key aspects considered while designing the ship were to develop a high-performance vessel with least energy needs, a ship with no generator utility when alongside, and a vessel with better than standard air emissions and zero emissions into water. The design will maximise the reuse of wasted energy and reduce hotel load.

The vessel will be equipped with ten retractable wind generators, ten retractable photovoltaic sails, kinetic floors and a 6,000m² solar farm on its top deck. It incorporates a self-sustained garden that uses recycled garbage and wastwater.

The cabins have been designed to offer high comfort according to its biophilic architectural design wherein occupants are accommodated close to nature.

The Ecoship will operate on a future-ready hybrid engine, which will be capable of running on bio-fuels. Cleaner-burning liquefied natural gas (LNG) will be used as the main fuel for the engine. During low wind conditions, retractable wind generators and photovoltaic sails will help reduce the use of main fuel, utilising 20% lesser propulsion energy.

"The maiden voyage of the vessel is expected in 2020."

The vessel’s propulsion system will also use alternative fuel generated from kitchen waste.

The Ecoship will emit 40% lesser carbon while also eliminating NOx and SOx emissions, when compared to large ships powered by a standard propulsion system.

Sustainable features of the Ecoship

The heating and air-conditioning on the eco-friendly ship will be augmented by the recycled waste energy, which will be derived from the main engine of the ship, and will reduce electricity load by 50%.

The aerodynamic upper hull of the vessel will help conserve fuel while sailing. An air bubble hull lubrication system will be used to reduce the resistance between the hull and seawater. The ship will also be equipped with adaptive machinery to incorporate future eco-technologies.

The closed-loop water use system aboard the vessel will ensure the usage of rainwater, wastewater and seawater to irrigate the plants within the garden.