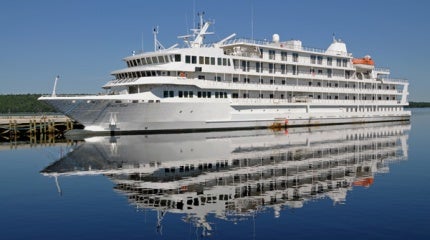 The small cruise ship was constructed by Irving Shipbuilding at its Halifax shipyard in 2009. The delivery was delayed by around four years as the builder and the owner were embroiled in a contract dispute over construction standards and compliance issues with vessel licensing authorities such as the USCG and the Flag State (Marshal Islands).

"The ship was commissioned for operations in June 2014."

The ship laid idle at the Shelburne Ship Repair facility until it was finally delivered to its owner in April 2013. It underwent a final outfitting at the Chesapeake Shipbuilding in Maryland, US, and was commissioned for operations in June 2014.

The luxury cruise ship sailed on its maiden voyage from Baltimore to Halifax, Nova Scotia. The 11-night inaugural itineraries included sailing through the Eastern Seaboard to Canada, with voyages to Canada, New England, the Great Lakes and the Caribbean.

Pearl Mist is registered under the Republic of the Marshall Islands with a Lloyd’s Register classification. The overall length of the vessel is 335ft and the moulded beam is 56ft. The vessel has a gross tonnage of 8,700t and a maximum draft of 12ft.

Anthem of the Seas, Germany

Anthem of the Seas is a quantum-class cruise ship being constructed by Meyer Werft at its Papenburg shipyard in Germany for the cruise company Royal Caribbean.

The new-build cruise liner provides luxury accommodation to 210 guests in 108 staterooms, each with a private balcony. The sizes of the rooms vary from 302ft² to 580ft².

The diesel engines drive two mono-block propellers via ZF 7646 reduction gears. The vessel is also equipped with two tunnel thrusters supplied by Thrustermaster. The propulsion system allows the vessel to cruise at a service speed of 17kt.

MTN Communications was selected to provide connectivity for the cruise ship on routes that tour the Americas and the Caribbean.

Pearl Mist is set to sail on about 17 cruises for the 2014 season. The itineraries will include 7-, 10-, 11- and 14-night cruises through the Canadian Maritimes, Great Lakes, St. Lawrence Seaway and Caribbean Islands.