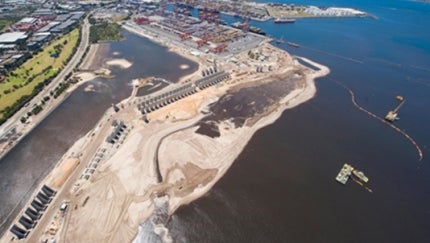 Port Botany Expansion (PBE), which won the Australian Construction Achievement Award in 2012, is a $1bn infrastructure project in New South Wales, Australia. The PBE project primarily involved the construction of a new terminal (Terminal 3) on 60ha of reclaimed land adjacent to the existing Patrick Terminal at Port Botany.

"The terminal expansion increased the port’s freight capacity to 1.6 million TEUs a year."

The approval for the construction of the new terminal at Port Botany was obtained in 2005 and construction began in July 2008. The first phase of the expansion was carried out by a consortium comprising Baulderstone and Jan De Nul. The port is owned by Sydney Ports Corporation.

The construction works of phase two of the project were carried out by Laing O’Rourke. Phase two became operational in 2014. The terminal expansion increased the port’s freight capacity to 1.6 million TEUs a year.

The new terminal generated up to 2,000 temporary jobs during construction and 1,900 permanent jobs upon commissioning. The terminal is also expected to add approximately $800m a year to the NSW economy. The new terminal is designed for a life expectancy of 100 years.

Phase one of the PBE project involved the reclamation of 63ha of land, construction of five new berths, and new wharves measuring 1,850m in length and 16.5m-deep. The phase also witnessed the construction of 216 precast retaining walls.

Initial dredging activities were conducted by installing a silt curtain around the bay area to confine the sediment. The dredging works were first carried out using a dredging vessel named Nu Bounty. Up to 90,000m³ of concrete and 15,000t of steel is estimated to have been utilised for the construction of the terminal.

Project activities completed in 2011 under phase one involved the construction of rail and road links, dredging of approximately 7.8 million cubic metres of fill materials for the shipping channels and berth boxes, construction of a 200m tug berth, and installation of additional rail sidings. The works also involved improvement of the estuarine environment, construction of a new four-lane boat ramp comprising of pontoons, and construction of car parking areas.

Phase two of the PBE project involved the selection of a stevedore for the terminal to carry out the development and operation works. Hutchison Port Holdings (HPH) was selected as the contractor in 2009. HPH further subcontracted Laing O’Rourke to carry out the civil and rail works for the project.

"The new terminal is designed for a life expectancy of 100 years."

Construction works under the Sydney Port Botany Terminal (SPBT3), which forms the first stage of phase two of the PBE project, were started in October 2012. The works involved paving of the internal road and rail facilities, installation of the container handling equipment, construction of the terminal buildings, construction of drainage facilities for which stormwater quality improvement devices (SQIDs) were installed, electrical works, and other ancillary activities.

A concrete batching plant was also constructed to facilitate the construction works.

Geotechnical engineering services and major design works for the project were provided by Golder Associates.

Asciano was contracted to deliver 44 of its patented AutoStrad® automated straddle carriers, which operate unmanned using radar and laser guidance technology for navigation.