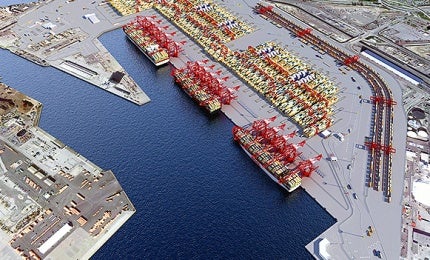 The Port of Long Beach Middle Harbor Redevelopment Project is an ongoing $1.2bn project to upgrade two old container terminals at the port and conjoin them into one advanced and green terminal. The upgrading works will be carried out on piers E, D and F.

The project will also double the container handling capacity of the two terminals from its current 1.3 million TEUs per year and cut down air pollution by 50%.

"Construction work commenced in May 2011 and is expected to take nine years to complete."

The port redevelopment project was first conceptualised in 2001. The Environmental Impact Report (EIR) for the project was carried out by the US Army Corps of Engineers (Corps) and was approved in April 2009.

The facilities at the harbour were leased to Orient Overseas Container Line (OOCL) and its subsidiary Long Beach Container Terminal (LBCT) in April 2012. The lease is for a period of 40 years and is worth $4.6bn.

History of the Port of Long Beach

It currently comprises six container terminals and is fitted with 66 ship-to-shore cranes. It handled more than six million TEUs in 2011. It is served by more than 140 shipping lines and is connected to 217 ports worldwide.

The Middle Harbor Redevelopment Project will expand the area of the existing terminals from 295 acres (120ha) to 345 acres (140ha).

"The Middle Harbor Redevelopment Project will expand the area of the existing terminals from 295 acres (120ha) to 345 acres (140ha)."

The project is being implemented in two phases. The first phase involves the renovation of the existing Pier E terminal. The second phase will connect the Pier E terminal with the Pier F terminal.

The second phase involves expansion of the rail infrastructure at the port, enabling the port to do away with about 1,000 trucks. The on-dock facilities will be expanded by an additional 47 acres (19ha).

On completion of the project, the harbour will be equipped with the latest electrified cargo-handling equipment for which an investment of $500m has been sanctioned.

Construction details of the port redevelopment

The works initially involve the reconstruction and extension of the wharf at Pier E terminal. Other construction activities include the construction of a dike, a concrete pile-supported wharf, a sheet pile bulkhead, a cast-in-drilled-hole (CIDH) pile wall, paving, lighting, dredging, and other ancillary activities.

Hyundai Heavy Industries (HHI) is one of the biggest ship construction companies in the world.

The project, in the later stages, will witness the construction of the container yard, intermodal yard, buildings, gates, and ancillary site works.

The electrical facilities being installed as part of the project will power the cranes and allow ships at berth to plug into the power grid, eliminating the use of diesel.

Dredging works for the main channel have been realised. Landfill activities for the new wharf and laying of concrete piles to support the wharf deck are currently underway.

The contract to carry out the construction works for the first stage of Phase 1 of the project has been awarded to the joint venture of Manson-Connolly. The contract is worth $154m.

"The project is expected to generate more than 14,000 permanent jobs when complete."

A five year management and environmental mitigation services contract worth $22m was awarded to ARCADIA.

Dynalectric Los Angeles, a subsidiary of EMCOR Group, is involved in the installation of the electrical systems for the project. The shore power systems for the harbour will be supplied by Cavotec.

Moffatt & Nicole has been contracted to provide overall programme management services for the planning and design of the new terminal.