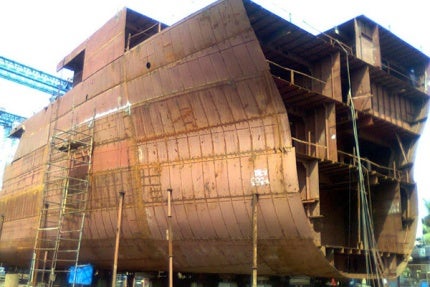 RV Sindhu Sadhana is a new multi-disciplinary oceanographic research vessel built at the private shipbuilding firm ABG Shipyard in Surat, India. The vessel was acquired by the Council of Scientific and Industrial Research of the National Institute of Oceanography (CSIR-NIO) in December 2013. It is India’s first indigenously built marine research vessel and costs approximately INR2.27bn ($37.77m).

"RV Sindhu Sadhana is intended for scientific exploration and oceanographic research activities in the Arabian Sea, Bay of Bengal and Indian Ocean."

The vessel was launched in July 2012 and was formally dedicated to the nation at a ceremony held at Marmugao Harbour, Goa, in July 2014.

RV Sindhu Sadhana is intended for scientific exploration and oceanographic research activities in the Arabian Sea, Bay of Bengal and Indian Ocean. It will perform deep-water explorations to locate new minerals and hydrocarbon resources and complete fishery research missions.

Sindhu Sadhana is a super silent vessel built according to the ISO 6954 standard. Her hull is divided into six watertight compartments fitted with watertight doors on watertight bulkheads. The overall length of the vessel is 80m, the moulded breadth is 17.6m and the depth to the main deck is 7.3m. The vessel has a gross tonnage capacity of 4,170t at a maximum draught of 4m.

The vessel is fitted with four fuel tanks, a fresh water tank, a reverse osmosis plant with a capacity to discharge 10t of treated water per day, an EVAC type sanitary discharge system and a chemical type sewage treatment plant meeting MARPOL regulations.

The ship has the capacity to carry 270t of fresh water and 600t of fuel oil. She has 300m³ of scientific storage available to labs and storage weather deck hatches, half of which has shelves, racks and tie downs while the other half is an open hold.

Ancillary equipment aboard the vessel includes a bilge and fire pumps as per regulations. The emergency fire pump has an electrical motor driven by power from an emergency generator. The ship is also fitted with a safety of life at sea (SOLAS) accommodation module providing air-conditioned accommodation to 57 personnel, including 28 crew members and 29 scientists.

Navigation equipment aboard the research vessel includes an electronic chart display and information system (ECDIS), a global positioning system (GPS) with attitude determination to 0.1 degree or better and an IMO Class I dynamic positioning system (DPS). This system helps halt the vessel at a point for sampling with a 24m long sediment core. It also allows for the accurate deployment of instrumented moorings and the towing of remotely operated vehicles (ROVs) and autonomous underwater vehicles (AUVs).

MV Island Performer is a multifunctional offshore vessel built at the Ulstein Verft shipyard in Norway for Island Offshore and its American partner Edison Chouest Offshore, who ordered the vessel in December 2012.

The internal communications are supported by superior voice communications, optical fibre Ethernet cabling and closed circuit television monitoring and recording over the science spaces and working areas. Monitors for ship control, environmental parameters, and science and over-the-side equipment performance are also provided for in most of the science spaces.

Transponding and receiving equipment aboard the vessel is comprised of satellite antennas and a GPS-attitude sensor that interrogates and receives satellite readouts of environmental remote sensing.

Scientific equipment onboard the vessel

Sindhu Sadhana features specialised laboratories, including two wet labs, a spacious multipurpose dry laboratory, a computer and data processing lab and an analytical laboratory. The ship is further outfitted with an 8ft x 20ft container which serves as a lab, berthing facility or storage room. The container can be loaded or offloaded as per provisions that limit its loaded capacity to 10t.

The 250m² of laboratory space is conveniently located and has easy accessibility. The labs, scientific office, storage and main deck levels are equipped with a man-rated freight elevator. The furnishing, heating, ventilation and air conditioning (HVAC), door, hatches and other lab fittings ensure lab cleanliness. Permanent fume hoods are installed in the wet and analytical labs.

"The frequency range used by the vessel for seismic activities is between 4Hz and 500Hz."

The labs have flexible fittings for easy replacement. Each lab has a separate electrical circuit on a clean bus for an uninterrupted power supply. The labs, vans and other main deck areas will be supplied with uncontaminated sea water and a clean, compressed air supply, free of oil.

The frequency range used by the vessel for seismic activities is between 4Hz and 500Hz, while echo sounding and acoustic navigation as well as Doppler current profiling frequencies operate at 3kHz to 50kHz and 75kHz to 300kHz, respectively.

A general-purpose winch is permanently installed for trawling or coring steel wire cable, with a handling capacity of 25t load and storage capacity of 10km of 18mm steel wire rope (SWR). Other special-purpose winches can also be installed at various locations along working decks. The winch control stations are positioned to offer optimum operator visibility with complete communications to laboratories and other onboard control stations.

Over-the-side handling equipment and frames aboard the deck can hold wire, cable and seismic cable arrays. The A-Frame at the stern handles ROV, AUV and other submersibles with a SWL of 25t. Another A-frame at the port side with SWL of 5t will launch conductivity-temperature-depth (CTD) rosettes, water samplers, grabs and small piston corers. A jib-boom crane with a capacity of 10t at 2m outreach is also installed on the starboard side for the coring operations.

In addition to the lifeboats required by the LSA, the vessel is equipped with a 16ft inflatable boat to facilitate launching and recovery, specifically supporting supplemental operation at sea including collecting, instrumentation and wide-angle signal measurement.

The vessel is also capable of towing scientific packages up to a total tension of 5t at 6kt and 10t at 2.5kt in sea states four to five.