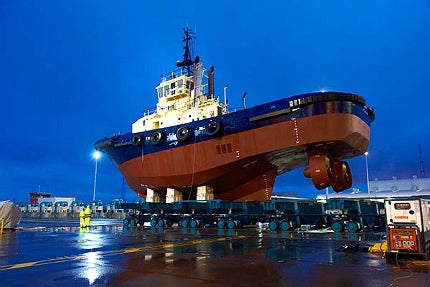 Techport Australia, based in Osborne, is strategically located about 15km from Adelaide’s Central Business District (CBD) and about nine kilometres from Adelaide International Airport. It has state-of-the-art ship building facilities and is a hub for the naval industry. It is managed by Defence SA, on behalf of the South Australian Government.

A major project to construct Common User Facility (CUF) at the port commenced in 2007 and was completed in February 2010. Commercial operations commenced in April 2010.

The CUF project forms part of the larger $8bn worth project for the construction of new Air Warfare Destroyers (AWDs) for the Royal Australian Navy, which are scheduled to enter service in 2014. The total investment for the CUF project reached about $300m.

Aurecon was the design consultant for the CUF project. Construction works for the project were carried out by the joint venture (JV) of McConnell Dowell Built Environs (MDBE) under a contract worth $170m.

"It is managed by Defence SA, on behalf of the South Australian Government."

The CUF covers an area of eight hectares and constitutes a wharf, a shiplift supplied by Rolls Royce, a runway and a dry berth. The wharf measures 213m in length and 25m in width, and was commissioned in October 2008. It can handle cranes and other heavy vehicles weighing between 140t and 864t. Servicing for the AWD vessels, including activities such as final outfitting, test and activation, harbour trials, sea trials, maintenance and repair, are carried out in the wharf.

Techport Australia is equipped with a Syncrolift shiplift. It measures 156m in length and 34m in width. The shiplift has a lifting capacity of 9,300t and is capable of operating at a water depth of 18m.

The 300m runway and dry berth at the CUF are complemented by a rail-based transfer system comprising of trestles and transfer bogies to facilitate vessel movements around the site and the shiplift. The runway along with the dry berth has the capacity to accommodate two AWDs simultaneously. The runway and the dry berth operations are carried out from an underground duct measuring 700m.

Construction of the CUF utilised about 20,000m³ of concrete and 2,500 piles. About 480,000m³ of material were dredged from the Port River at depths of up to 20m. Up to 97% of construction waste that would otherwise have been sent to landfill were recycled as part of the project. The project overall utilised 750,000 man hours. The concrete used for the construction of the facility was sourced from Readymix’s Brompton plant, and the neighbouring Osborne plant.

The $50m worth shiplift supply contract was awarded to Rolls Royce. Rolls Royce subcontracted RPG Australia and Mayfield Engineering to respectively provide the steel for the construction of the shiplift platform and the motor control centre.

Leed Engineering and Construction was contracted to carry out the headworks.

Rocla supplied about 300 box culverts for the construction of the underground service duct at the CUF.