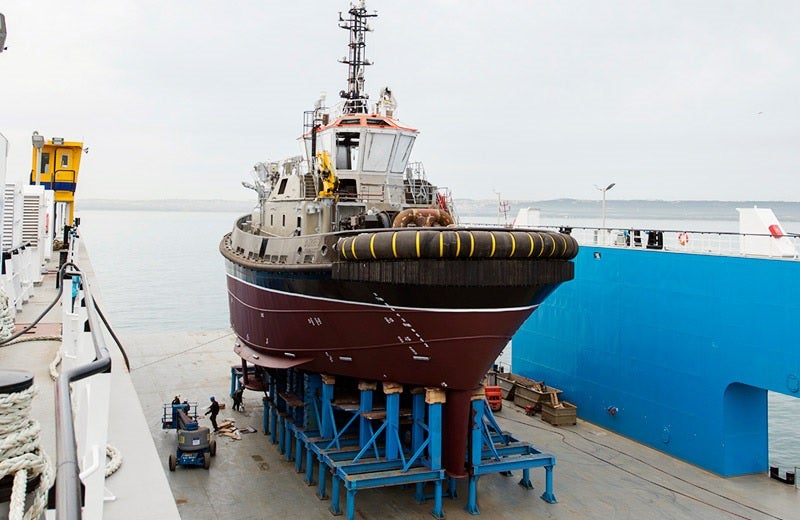 VectRA 3000 is a new series of Voith Schneider propeller (VSP) tugs being constructed by Sanmar for operators worldwide. Designed by Robert Allan, the VectRA 3000 series vessels are the high-performance VSP tugs of tractor configuration.

The first vessel in the series built for Tripmare, M/T Ares was launched in February 2016 at Sanmar Shipyard in Altinova. Its maiden voyage is expected in April 2016.

VectRA 3000 is Sanmar’s first tug series to be constructed in accordance with ABS Habitability workboat (HAB (WB)) notation, where specific attention has been paid to minimise vibration and sound levels.

The VectRA 3000 series’ cost-effective design integrates high-speed engines, electronic controls and MLC-2006-compliant crew accommodation. The hull is made of all-welded mild steel, while the deckhouse and wheelhouse are also constructed using steel.

Communication and navigation systems on VectRA 3000

The comfort and quality of accommodation on VectRA3000 will meet North European standards. Accommodation facilities are provided on the main deck for a total of six people. Two officers onboard will be housed in one cabin each, while petty officers will be accommodated in two single cabins. The boat also has a double cabin for the crew.

Each cabin integrates private en-suite facilities and all cabins will feature plugs for TV and GSM aerial. Rooms will be furnished with teak imitating IMO-approved floor material. The vessels will also feature a galley and mess area next to a central entry and wet lobby area.

A pair of Reintjes model WAF 843 clutch and reduction gearboxes will couple the engines and propellers. The configuration reduces transmission losses and fuel burn, when compared with a conventional Voith Turbo coupling.

The power-plant provides a bollard pull of up to 70t and a speed of approximately 12.5k. Onboard electricity for the ship systems is delivered by two 86ekW Caterpillar C 4.4 generator sets.