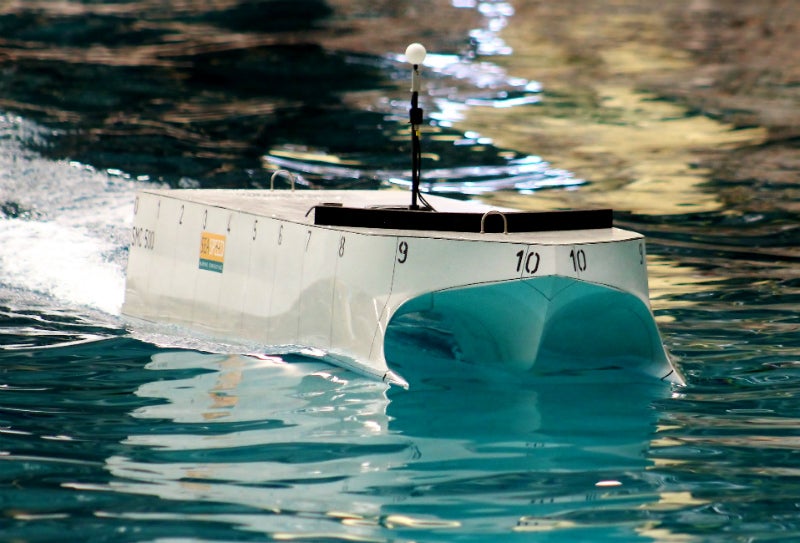 Free-running models of a series of patrol craft designs (with lengths of 20m to 50m, and speeds ranging from 30k to 50k) were constructed, outfitted and tested in controlled wave conditions.
Side-by-side free running models of a series of seven fast lifeboats were tested for the RNLI using coastal sea conditions to achieve good up-sea motion and impact statistics.
Full-scale sea trials have been undertaken on military vessels for the assessment of handling, manoeuvring, seakeeping and levels of whole body vibration.
Wash waves from conventional and fast ferry vessels were monitored at full and model-scale and used to develop passage plan risk assessments for P&O Ferries.
The performance of crew transfer vessels has been monitored using the Seaspeed VMS, during builder’s trials and on numerous offshore wind farm sites, in transit, approach and transfer conditions.
During an extensive R&D programme for The Carbon Trust, Seaspeed studied the physical mechanisms of fender slip on crew transfer vessels while they were pushed against offshore turbine docking poles.

Seaspeed specialises in the hydrodynamic testing of ships and other marine systems to evaluate their performance at sea.

The company’s staff constructs hydrodynamic models and use advanced instrumentation and procedures to test them in suitable facilities, such as towing tanks, ocean basins, shallow water tanks, and coastal sea areas.

Tests are centred around the use of free-running, radio-controlled models, which enable realistic, comprehensive and cost-effective test programmes to be undertaken covering power, manoeuvrability and sea-keeping at all headings.

Global load measurements and active systems, such as ride control devices and stabilised gangways, have also been tested.

Seaspeed develops lifeboat hulls with a focus on motion and handling in adverse conditions.

Under contract with the RNLI, the company assisted in the development of the fast carriageway Shannon Class lifeboat hull by testing a wide range of relevant hull designs using free-running models. This vessel design is now in production.

Global loads have been measured in a range of limiting speed and wave conditions to better define structural loading issues.

The vessels were tested for their limiting performance characteristics at speed in waves (for determination of acceptable transit conditions) and while thrust up against wind turbine towers (to evaluate acceptable personnel transfer conditions).

In order to verify actual performance at sea, Seaspeed has developed a range of monitoring equipment which can provide short, medium or long-term vessel performance monitoring.

The Seaspeed Vessel Monitoring System (VMS) is an automated device that monitors, records, analyses, displays, and exports performance data so that timely actions can be taken to improve ship performance.

The system has an interactive display that helps masters and chief engineers to minimise fuel consumption on passenger ferries, and captains of crew transfer vessels to assess passenger safety and comfort.

Power, manoeuvring and sea-keeping trials have been undertaken for passenger ferries, workboats and superyachts, monitoring directional and dynamic stability, position keeping and manoeuvrability performance, and assessments of ease of handling whilst at sea and in harbour.