The cutter suction dredger Artemis was successfully commissioned in April 2013.
The CSD Artemis was used at Port of Rotterdam to deepen the harbour basin.
The CSD Artemis at Port of Rotterdam.
The CSD Artemis and Multicat Cronus were used at Rotterdam port to dredge a trench in the access channel to the harbour.
The Artemis cutter suction dredger is 131.5m long.
The ship was launched at the IHC Dredgers shipyard in Kinderdijk, the Netherlands, in June 2012. Image courtesy of Konutherm.
Artemis is installed with Konutherm's thermal oil systems. Image courtesy of Konutherm. 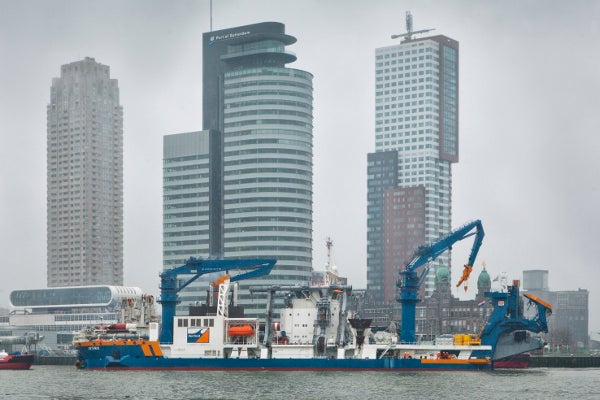 Artemis is the second self propelled cutter suction dredger (CSD) built for Van Oord, a company based in the Netherlands.

The vessel’s naming and launch ceremony was held at the IHC Dredgers shipyard in Kinderdijk, the Netherlands, in June 2012. It was successfully commissioned in April 2013.

"The Athena is currently being used at the Ichthys LNG project in Darwin, Australia."

Artemis is a sister ship to Athena dredger which was delivered in late 2011. The Athena is currently being used at the Ichthys LNG project in Darwin, Australia.

IHC Merwede signed a contract with Van Oord for the design, construction and delivery of the vessel in December 2010.

Details of the Artemis dredger

The ship, named after Artemis, the Greek goddess of the hunt, is being used specially for dredging work on hard ground at the Liverpool2 Container Terminal Quay Wall. The vessel is expected to remove 588,000 cubic metres of underlying rock, sand and gravels, which will be reused in the infill operations behind the quay wall.

The cutter suction dredger was used with Multicat (MuC) Cronus at the Wilhelmina Quay in the Port of Rotterdam to deepen the harbour basin and dredge a trench in the access channel to the harbour. Approximately 500,000m³ of hard rock and clay was dredged from the basin.

The ship has an overall length of approximately 131.5m and can accommodate 50 people. The beam and draught of the ship are 27.8m and 6.6m respectively. The moulded depth is nine metres.

"It is one of the most modern and powerful self-propelled cutter suction dredgers in the world."

The ship features a spud carriage with hydraulic buffering, which enables the ship to work for longer periods in dreadful weather. The deckhouse of the ship is mounted on air springs to reduce noise and vibrations in the accommodation section. The ship is highly robust and can operate in harsh conditions.

The large steel teethed rotating cutting head on the front of the vessel loosens the soil from the harbour. The loosened soil gets sucked up by a powerful centrifugal pump and is discharged further with the help of a steel pipe. The spud ensures the ship can remain stable.

Artemis can run at a maximum cutter power of 7,100kW with a sailing speed of 12kts. Its propulsion system includes three Wärtsilä 6L46F engines and Wärtsilä fixed pitch propellers (FPPs).

The dredger is installed with three exhaust gas heaters and a fired heater.

Zenitel Marine provided its VINGTOR ACM solutions for communications and signalling aboard the ship.

Aegir is a deepwater construction vessel (DCV) scheduled to start operations in the fourth quarter of 2013.