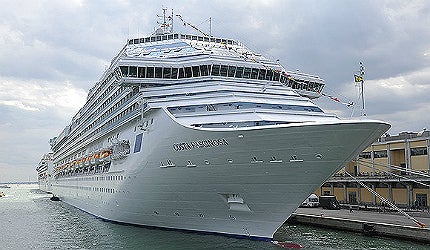 Costa Fascinosa is the youngest Concordia-Class passenger ship operated by Italy’s Costa Crociere, an affiliate of cruise ship operator Carnival Corporation. Delivered in May 2012, she is the last of two sister-ships and represents an investment of $668.8m.

The first ship, Costa Favolosa, was delivered in June 2011. The two sister-ships are the largest cruise ships to bear an Italian flag.

Costa Fascinosa, the 16th member of the Costa fleet, was built by Fincantieri at its Marghera shipyard in Italy. Florida-based ship designer and architect Joseph Farcus had designed the vessel’s interiors.

Green Plus recognition for Costa Fascinosa

"Costa Fascinosa, the 16th member of the Costa fleet, was built by Fincantieri at its Marghera shipyard in Italy."

Fascinosa’s interior environments are inspired by film stars, exotic locations, memorable international celebrities and so on. Furnishings and interior decoration are based on silver, gold and purple colour themes.

Green features of Costa Fascinosa have helped her earn Green Plus notation. This is the highest notation awarded by Genoa-based classification society RINA, to new ships whose design architecture, onboard machinery and operational procedures contribute to achieve environmental performance better than the minimum international standards.

Costa Fascinosa is among the first ships in the world to be equipped for alternative maritime power (AMP). This means the vessel can be supplied with shore side electric power, enabling main and auxiliary engines to be turned off when berthed in ports.

Some of the sustainable features include 100% water separation and reprocessing of aluminium, glass and other waste products. The ship is fitted with reverse osmosis desalination plants to produce potable water.

Energy saving features include the use of LED light bulbs, ecological silicone-based coatings to improve resistance, and automatic lighting control systems which adjust the ship’s outside lighting in accordance with the presence of natural light.

Hot water produced by the engines is recycled and then reused for warming the cabins and common areas. The air conditioning is so optimised that its airflow adapts automatically to the outside temperature. Maintenance of propellers is undertaken on a routine basis so that they operate at optimum efficiency.

Costa Fascinosa was constructed as part of Costa’s $12bn (€9.6bn) fleet expansion which began in 2000. The multibillion programme called for the construction and delivery of nine vessels in nine years, with first delivery in 2003.

"Construction of Costa Fascinosa and Costa Favolosa was announced in October 2007, with Fincantieri as the builder."

Construction of Costa Fascinosa and Costa Favolosa was announced in October 2007, with Fincantieri as the builder.

The keel of Costa Fascinosa was laid at Marghera in September 2010. Construction was started by lowering the first block, measuring 12m in length and 295t in weight, into the shipyard’s building dock.

In June 2011, the ship was floated out of the building dock and towed to the finishing dock for the final phase of her construction.

Initial sea trials were conducted in April 2012 and the ship was officially handed over to her operator one month later at the Venice Passenger Terminal.

Fincantieri had engaged approximately 3,000 yard workers and 7,000 other workers to complete the vessel’s construction. Upon completion, the ship’s gross tonnage was 114,500t and length was 290m.

New Royal Princess is a cruise liner being constructed by Fincantieri for the British-American cruise line Princess Cruises.

A total of 3,800 passengers can be accommodated in 1,508 cabins. About 35% of those are provided with private balconies. Staterooms aboard the vessel can broadly be categorised into suites, balconies, ocean views and inside cabins.

Samsara Veranda and Ocean View with Veranda are the two types of balcony staterooms. These cabins measure 220 square feet.

Recreational venues aboard the Italian vessel

Facilities aboard the vessel include five restaurants, 13 bars, four swimming pools and five whirlpools. Sports facilities include a multipurpose court and a jogging track.

Samsara spa, one of the largest wellness centres built on a passenger ship, extends across two levels and covers 6,000 square metres. It has a gym, spa baths, thalassotherapy pool, sauna and UVA solarium.

A grand prix simulator, located on the vessel’s highest deck, reproduces the feeling of racing circuits. There is also a golf simulator. It is fitted with latest technology to create a realistic environment.