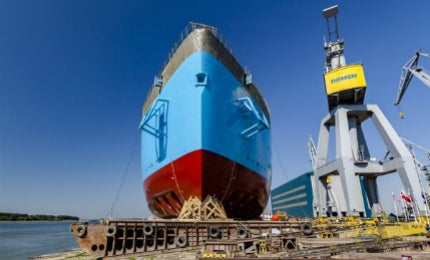 The multi-role vessel is designed to replace conventional tug barge operations in offshore loading/off-loading missions. The first ship based on the DOC 8500 design, Nexus cable-laying vessel, was delivered to Van Oord in December 2014.

Damen Shipyards Group received an order from Maersk Supply Service for the delivery of a DOC 8500 vessel in March 2014.

Christened Maersk Connector, the vessel was launched in July 2015. It was delivered in February 2016. Maersk Supply Service operates the vessel for DeepOcean under a seven-year charter agreement.

The vessel has a modular platform that allows for the installation of cable-laying and other support modules according to customer requirements. Modules can be attached in the building phase or retrofitted during specific operations.

The vessel can be configured with a Damen deep-dredge system. It also supports the installation of bunkering facilities to replenish offshore vessels/facilities at oil and gas fields, and support crew transfers. It can accommodate up to 90 personnel.

The large deck offers an unobstructed area of more than 2,300m². It offers 20t/m² load capacity and superior roll-on/roll-off (Ro-Ro) capability. It can be installed with a knuckle-boom crane, a stiff boom crane, a cable-laying installation and support structures for A-frame and electric-hydraulic harbour mooring winches.

DOC can be equipped with a DP2/DP3 system for conducting offshore loading/off-loading operations. It can be installed with additional retractable bow thrusters and/or installed power to optimise the DP2 functionality.

A helicopter deck on the vessel supports the operations of a medium-sized rotorcraft such as Sikorsky S76 and S92.

The sturdy design of the FSC 1605 makes it the most suitable and preferred workhorse for operation in offshore oil and gas industry.

Designed to the latest ergonomic and comfort standards, each cabin has access to the internet, radio and TV. A flexible, standalone accommodation unit of 30 people can also be installed to increase the total number to 60 people under SPS regulations.

The propulsion system ensures an average speed of 11.7k and endurance of 65 days.

DOC has a zero dumping certification, and a green passport, which provides the inventory of potential hazardous materials onboard.