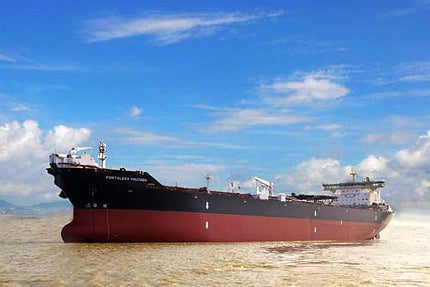 Fortaleza Knutsen is the first of the two 105,000DWT shuttle tankers to join Knutsen OAS Shipping’s fleet. She was constructed by COSCO at its Nantong Shipyard and currently serves Petrobras Transporte (Transpetro), along with her sister vessel Recife Knutsen.

Fortaleza Knutsen is being used to transport crude oil and condensates from offshore oil field installations of Petrobras to onshore terminals and refineries. The vessel will continue to serve Petrobras until 2023. It provides an alternative to the use of pipelines for the offshore industry.

Fortaleza Knutsen was named in December 2010 and was delivered in March 2011. It meets the standards and safety requirements of three parties, including Norway’s Statoil, Petrobras and DNV.

"The vessel will continue to serve Petrobras until 2023. It provides an alternative to the use of pipelines for the offshore industry."

The bow loading system of the vessel located on the main deck forward enables it to transmit crude oil both in the floating and moving states of the supplier and receiver respectively. The hull of the vessel is reinforced to prevent the crews from fatigue.

The technology cuts down the generation of VOC during loading and transit by installing new drop lines for each tanker. The drop lines are designed with larger diameter compared to conventional lines and oil is fed at the deck level.

The poured oil flows at the cylinder wall and leaves an open space in the middle which, along with the reduced velocity of the oil due to the increased diameter of the drop lines, allows the gas to rise.

The shuttle tanker is capable of accommodating 40 people. It comprises of 26 single cabins, two cabins accommodating four people each and a cabin accommodating six people from the repair team.

Other facilities include two mess rooms, two recreation rooms, a hospital, a gymnasium and office spaces.

The communication equipment aboard the vessel complies with GMDSS A3 requirements.

Engines and machinery for the Brazilian shuttle tanker

"The communication equipment aboard the vessel complies with GMDSS A3 requirements."

The vessel is capable of operating in severe conditions at sea thanks to its equipment and facilities including a DP2 (dynamic positioning system), a MAN VBS1800 ODS controllable pitch propeller, fore-and-after thruster, unmanned machinery space, a Schilling rudder and a heli-deck located on the upper deck.

The vessel’s propulsion system enables it to sail at a speed of 14.7kt.

CBO Atlantico Platform Supply Vessel (PSV) is the first in a series of six such vessels being manufactured by the Aliança Shipyard, Brazil, for Companhia Brasileira de Offshore (CBO), an offshore shipping company operating out of Rio de Janeiro.

Development of the Lufeng-21 field in the South China Sea presented serious climatic and economic obstacles to its Norwegian operator Statoil.