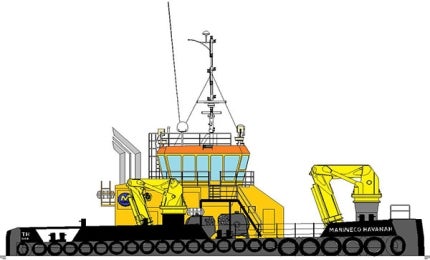 Marineco Havanah is being built by Damen Shipyards Group and will be the second vessel in the Multi Cat 2712 series of work boats. The first vessel of the series, Multi Cat 2712 Fox Fighter, was delivered to Norwegian company Samba.

The shipbuilding contract for Marineco Havanah was placed by MarineCo UK in December 2014. The vessel is currently under construction and is scheduled to be delivered in April 2015.

The new vessel is classified as Hull + MACH Tug unrestricted navigation + AUT-UMS by the Bureau Veritas.

The workboat will perform multiple missions, including anchor handling, dredger service, towing, supplying, hose handling and survey operations. It can also be deployed in river, inshore and offshore missions.

Marineco Havanah will feature a functional, maintenance-friendly wheelhouse and deck layout. It will provide optimum deck space to house deck equipment whereas the wheelhouse will offer 360° visibility, ensuring a high-level of safety on the deck.

"The new vessel is classified as Hull + MACH Tug unrestricted navigation + AUT-UMS by the Bureau Veritas."

Deck machinery and accommodation aboard the workboat

The vessel will be outfitted to provide accommodation to seven people in five heated and air-conditioned cabins, two of which are double cabins and three are single cabins. It will also feature a galley and sanitary facilities.

The propulsion system will integrate two Caterpillar C32 Acert main engines, developing a total power output of 1,790bkW at 1,800rpm. Each engine drives a fixed-pitch propeller in optima nozzles through a Reintjes gearbox.

A Kalkman Beta 250H hydraulic-driven bow thruster fitted to the vessel generates a power of 184kW. The propulsion system will provide a maximum speed of 10kt.