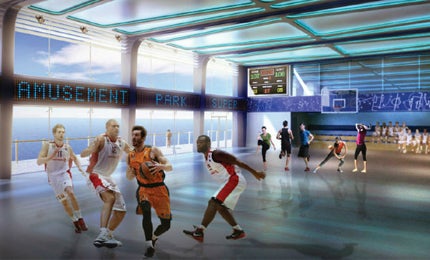 MSC Meraviglia, the first of Vista generation ships being constructed under MSC Cruises’ $5.4bn investment plan, will be the biggest cruise ship in the company’s fleet.

First steel for the vessel was cut in April 2015 at STX France’s Saint Nazaire shipyard. The vessel is expected to be delivered in May 2017.

MSC Meraviglia is predicted sail on her maiden voyage in the western Mediterranean covering Genoa, Naples, Tunis, Marseilles and Barcelona ports, in June 2017.

Viking Star is the first cruise ship of the Viking Ocean Cruises fleet.

The ship will feature a double-deck atrium with glass wall that offers views of the sea. It will accommodate a total of 4,500 passengers in 2,250 cabins.

Accommodation aboard the MSC cruise ship

The cruise ship will feature 12 types of staterooms and suites in a number of categories including interior, ocean view, balcony, aurea suite, duplex suite, MSC yacht club’s inside, deluxe, executive and family, and royal suites, as well as family, super family, and super family plus.

All the staterooms will be furnished with either single- or double-beds, a spacious wardrobe, a bathroom with shower, as well as an interactive TV, telephone, wi-fi connection, a mini bar and a safe.

All the suites will be provided with double beds, a spacious wardrobe, bathrooms with tub and shower, an interactive TV, a telephone, and a laptop with internet connection.

Entertainment and other facilities aboard MSC Meraviglia

The ship will feature a double-deck indoor promenade that is fully-covered with a giant 5,167ft² LED screen, which will act as a digital sky displaying images and vistas, and special-effect visual shows during both day and night.

The ship will include an outdoor aqua park connected to a double-deck indoor amusement park.

Other entertainment venues will encompass a double-deck aft lounge, a solarium with pool and specialty restaurants, shops, and innovative bars.

The ship will also offer products from LEGO and Chicco brands for creating memorable vacations for parents and the children. The auditorium aboard the ship will host Broadway and Las Vegas-style theatrical performances as well as live music and dance.

Technology will feature on the ship that will allow for easily access to the staterooms and onboard venues. It will also allow passengers make payments using the cruise card or smart-phone and geo-locate kids and friends.

MSC Meraviglia will be powered by four 12 cylinder engines, which will enable it to sail at a service speed of 19.3kt and a maximum speed of 22.7kt.