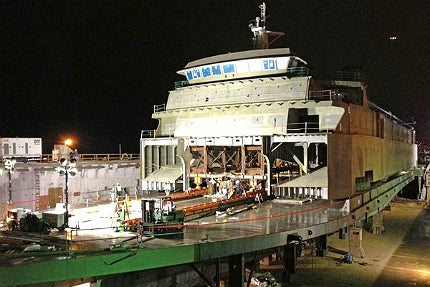 MV Tokitae was constructed by US Fab. The vessel sails the waters of Puget Sound in Washington. It was ordered in 2011, the keel was laid in March 2012 and the superstructure was laid on the hull in March 2013. The vessel was christened in March 2014 at a ceremony held at Vigor Industrial’s shipyard in Seattle and delivered in June 2014.

Construction on the second vessel MV Samish began in December 2012 and delivery was made in April 2015. The construction of the third vessel named Chimacum started in 2014 with an estimated investment of $123m and is expected to be completed by 2017. The fourth vessel’s construction will depend on the availability of funding in the near future.

The construction cost of the first vessel was $144 m, while the second and third vessels cost $126.45m and $123m respectively.

"MV Tokitae was built by US Fab. The vessel sails the waters of Puget Sound in Washington."

JM Martinac Shipbuilding was the main sub-contractor to US Fab, for the project. Other key players involved in the construction of the ferry include Nichols Brothers Boat Builders, Jesse Engineering, Vigor Marine and Eltech Electric. The design of the vessel was provided by Guido Perla & Associates.

The design and installation of the lighting, switchboards, power, control, interior communications and navigation equipment for the vessel were carried out by Eltech.

The hydraulic transfer system for moving the superstructure to the hull was designed by Engineered Heavy Services. Omega Morgan was also involved in lifting the structure.

Construction of the Olympic Class ferry

The ferry’s hull was constructed by Vigor Industrial, a subsidiary of US Fab, at its Harbor Island shipyard in Seattle. The main structure of the ferry was built by Nichols Brothers at its facility in Freeland, Wash. The superstructure of the vessel, which alone weighs 1,100t, was lifted to the hull using two drydocks, buoyancy controls, 600ft of track and 24 hydraulic lifts.

Jesse Engineering built the drive-on and drive-off ends of the vessel. The sections of the vessel were assembled together in Seattle and final outfitting was carried out in Everett.

The construction of the vessel necessitated the use of 2,917t of steel. It is the ninth Washington State Ferry built at the Harbor Island shipyard. The ferry is designed for a maximum capacity to carry 144 cars and 1,500 people.

Design and facilities on MV Tokitae

The vessel comprises five decks, with the first deck being the lower vehicle deck, followed by an upper vehicle deck, the passenger deck, sun deck, navigation bridge deck and the upper house level.

The upper half of the vessel, above the vehicle decks, was crafted on Whidbey Island, while the end sections of the vessel were manufactured in Tacoma.

The ferry is equipped with two diesel engines with an output of 4,500kW. The propulsion system aboard the vessel enables it to sail at a speed of 17kt.

AET is one of the world’s leading providers of ocean transportation for petroleum.

Allure of the Seas – Cruise Ship, United States of America

MS Allure of the Seas is the largest cruise ship in the world.