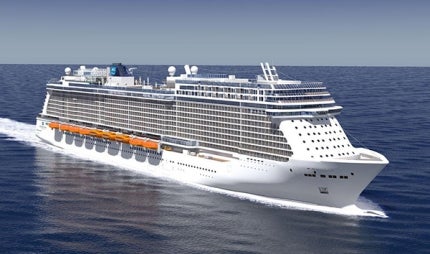 MSC Preziosa, constructed at the STX shipyard in St. Nazaire, France, was delivered in March 2013.

In September 2013, the two ships were named Norwegian Escape and Norwegian Bliss, through an online campaign held in the US, Canada (excluding Quebec), Spain, Germany and the UK.

The contract value of the project is estimated to be €1.4bn ($1.92bn). NCL has arranged for 80% of export credit financing through KfW IPEX-Bank of Germany.

NCL’s new Breakaway Plus ships are similar in design to its Breakaway Class vessels, Norwegian Breakaway and Norwegian Getaway.

An additional deck is built to incorporate any new innovations. The total length of each cruise liner is approximately 325.9m, width 41.4m. Each ship will have 4,200 passenger berths.

Breakaway Plus propulsion and machinery

Each Breakaway Plus vessel is fitted with five tier II-type V48/60CR engines supplied by MAN Diesel & Turbo. Two of the five engines have a power capacity of 14V each and the remaining three have a capacity of 12V each.

The engines have a total power capacity of 76,800kW and use common-rail injection system, which is suited for both heavy fuel oil and distillate fuels, and helps reduce fuel consumption and gas emissions.

"The engines have a total power capacity of 76,800kW and use common-rail injection system, which is suited for both heavy fuel oil and distillate fuels, and helps reduce fuel consumption and gas emissions."

Advanced scrubber technology developed by Green Tech Marine (GTM) is used by the Breakaway Plus ships. GTM provides five scrubbers for each ship.

These GTM-R scrubbers are small and occupy little cabin space and other service areas. The scrubbers enable the ships to comply with the 0.1% sulphur limit in emission control areas (ECA).