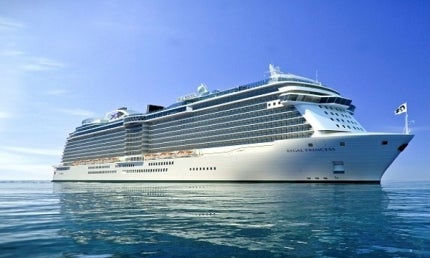 Regal Princess is the latest cruise ship in the Princess Cruises fleet owned by the Carnival Group. The vessel is the sister ship of Royal Princess which entered service in June 2013. It bears many features similar to those of the Royal Princess.

Construction of the Regal Princess cruise ship began in August 2012, with a keel laying ceremony held at the Fincantieri shipyard in Monfalcone, Italy. The ship was launched in March 2013 and is scheduled to enter service in May 2014. The estimated cost of the vessel is $735m.

The ship will sail on a seven-day maiden voyage from Venice to Athens with stops at Corfu, Mykonos and Istanbul. It will then sail on a six-day cruise from Athens to Venice including stops at Kusadasi, Santorini, Katakolon and Dubrovnik.

The 142,229t Regal Princess cruise ship is the biggest cruise ship ever built by Fincantieri. The vessel has 13 decks, an overall length of 330m and width of 38m. It can accommodate 3,600 passengers, with the total capacity to accommodate approximately 5,600 people including crew.

MSC Preziosa, constructed at the STX shipyard in St. Nazaire, France, was delivered in March 2013.

The ship features the Sanctuary rest area, a Princess Watercolor Fantasy water and light show featuring dancing fountains that raise water up to 33ft into the night sky, and an expanded atrium. It also features a top-deck glass-bottomed enclosed walkway known as SeaWalk. The SeaWalk extends approximately 28ft beyond the edge of the vessel.

New attractions onboard the Regal Princess include the Princess Live TV studio, the Ocean Terrace Seafood Bar, Gelato, The Pastry Shop at Horizon Court and the Deluxe balcony. The staterooms are each equipped with a flat-screen TV and a shower with adjustable height and hand-held massage shower head.

Entertainment amenities aboard the ship include the 150-seat Princess Theatre, which shows first-run feature-length films, the Movies under the Stars outdoor theatre and night clubs.

The Club 6 and Princess Casino, Club Bar and Pool Bar will serve a collection of cocktails, wines and liquors. The Sanctuary, Cabaret Lounge, Vista Lounge, Royal Lounge, Piano Lounge, Crooner’s Lounge and Bar, Bellini’s Italian cocktail bar and Wheelhouse Bar are the other main public spaces on the ship.

Youth and teen centres offer video games and movies, arts and crafts, board games and jukeboxes.

Staterooms feature two twin beds that can be converted into a queen-size bed, a television, phone, refrigerator, personal safe, walk-in closet, a bathtub with shower and other deluxe amenities.

Bluewater Texas Terminals (BWTX) is a proposed offshore deepwater port in Texas, US, for exporting crude oil to global markets.…

23 Dec 2020
Registration is disabled.
We use cookies to ensure that we give you the best experience on our website. If you continue to use this site we will assume that you are happy with it.ContinueLearn more