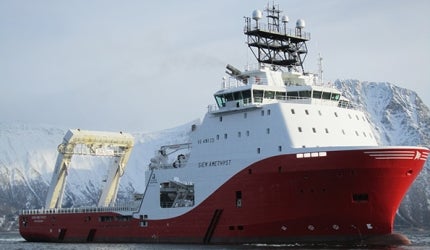 Siem Amethyst is a large-capacity anchor handling tug supply (AHTS) vessel owned and managed by Siem Offshore, a supply and subsea shipping company headquartered on the Cayman Islands. Delivered in April 2011, Siem Amethyst was the last in a series of ten vessels built by the Norwegian ship builder Kleven Verft.

The vessel is built to carry out towing, anchor handling, and deep water inspection and construction works. Moreover, she can be deployed to undertake supply and support operations for the offshore industry.

"One of the most important features of Siem Amethyst is her capability to switch between different modes of propulsion."

Contract for the construction of the vessel was awarded in August 2007. The keel was laid in March 2009 and the vessel was launched in May 2010. The vessel’s hull was manufactured in Kherson, Ukraine, by Kherson Shipyard.

In April 2011, Norwegian Guarantee Institute for Export Credits, GIEK (Garanti-instituttet for eksportkreditt), a Norwegian government agency, provided a guarantee to 80% of the long-term loan taken by Siem Offshore for the construction of the vessel. The remaining 20% was covered by SR Bank and ABN AMRO.

The design of Siem Amethyst is based on the VS 491 CD model, which was developed by the Norwegian ship design group Vik-Sandvik (acquired by Wärtsilä in 2008). The VS 491 CD anchor handlers are more suitable for operations in the North Sea because of their eco-friendly design and large capacities.

The Siem Sapphire anchor handling tug supply (AHTS) vessel is the third in a series of ten vessels built by Norwegian ship builder Kleven Verft for its client Siem Offshore.

One of the most important features of Siem Amethyst is her capability to switch between different modes of propulsion. This has been made possible by Wärtsilä’s combined diesel electric and diesel mechanical system.

The vessel can achieve a bollard pull of up to 300t when operating in diesel electrical booster mode.

The total length of the ship is approximately 91m, while the moulded breadth is 22m. The length between perpendiculars (LBP) is 79.38m. Height to first deck, height to C-deck and height to bridge deck are 9.6m, 19m and 27.4m respectively.

Accommodation and facilities onboard Siem Amethyst

A total of 60 crew members can be accommodated onboard the vessel. There are 20 single cabins (one-man) and 20 double cabins (two-man).

Facilities aboard the vessel include a deck office, hospital, conference room and gymnasium. There is also a cooler room and a freezer room, measuring about 15m² and 13m² respectively.

"The total length of the ship is approximately 91m, while the moulded breadth is 22m."

The vessel’s cargo deck measures approximately 820m² in area. It is capable of loading a maximum of 1,600t of cargo. Deck strength is 10t/m².

Equipment fitted on the AHTS

The AHTS is fitted with a Hydramarine deck crane and an ROV crane. The deck crane, at 15m outreach, can lift 3t of load, while the ROV crane can lift ten tonnes at 18m outreach. The third is a gantry crane of 42t capacity.

Rolls-Royce has supplied an anchor handling winch (500t), two tugger winches (24t each) and two capstans (14t each). A 250t capacity A-frame was supplied by Axtech.

Siem Amethyst is powered by two Wärtsilä 16V32 main engines. Each engine has a capacity of 8,000kW. There are two Alconza shaft generators of 3,400ekW each and two Caterpillar 3516TA C auxiliary generator sets, each rated at 2,100ekW. There is also a 425ekW emergency generator set.

Propulsion is provided by two Wärtsilä main propellers, each 9,500kW.

Side thrusters include four Brunvoll tunnel thrusters. Two of them are fitted aft and two are fitted forward. The vessel is also fitted with an 830kW Brunvoll retractable thruster.