Expand
An artist's rendition of the proposed Stad Ship Tunnel.
The tunnel, with a height of 45m, width of 36m and length of 1.7km, will be capable of accommodating large cargo and passenger vessels of up to 16,000t.
An overview of the first tunnel in the world to be built exclusively for shipping. 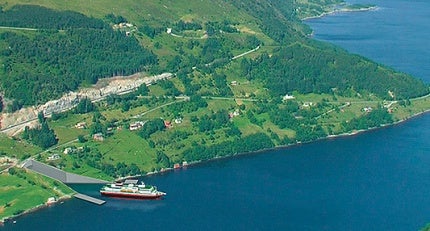 The proposal to construct the long-awaited Stad Ship Tunnel in Norway is on the verge of fruition, with support being rendered by the government for the latest design submitted by Nordfjord Vekst.

"Stad tunnel will be the first tunnel in the world to be built exclusively for shipping."

The proposed tunnel project is part of the Norwegian government’s National Transport Plan for the period 2014-2023, which aims to identify projects to transfer 25% of all goods transported by road to sea and rail modes.

Stad tunnel will be the first tunnel in the world to be built exclusively for shipping. It will bypass the Stadlandet (Stad) peninsula in Selje and connect two fjords, averting ships from the harsh weather conditions at Stadlandet on the western coast of Norway. It will be located near the towns of Teigen and Berstad, between Bergen and Alesund.

Purpose of the Stad Ship Tunnel

The Stadlandet (Stad) peninsula in Selje is a major bottleneck for ships due to the adverse weather conditions. The highest wind speed in the country is witnessed in this foreland, with extreme conditions occurring 90 to 110 days a year.

MS Stavangerfjord will be the first cruise ferry to operate on engines fuelled solely by liquified natural gas (LNG).

The Stad peninsula serves as a mountainous divide between the Norwegian Sea to the north and the North Sea to the south. It is a mountain plateau with the highest point reaching a height of 645m.

Nordfjord Vekst has announced that the waters of the Stad peninsula have so far caused 46 accidents and near-accidents, and 33 deaths since the end of the Second World War.

The tunnel project will primarily improve safety and enable the country to achieve more environment-friendly transport on the coast. The tunnel is also expected to become a major tourist attraction, which will further boost the local economy.

Details and construction of the Nordfjord Vekst-designed tunnel

The tunnel will measure 45m in height, 36m in width and will span a length of 1.7km. It will be capable of accommodating large cargo and passenger vessels of up to 16,000t.

"The tunnel will be capable of accommodating cargo and passenger vessels of up to 16,000t."

The project will include the construction of a cofferdam at each end of the tunnel. Excavation works will be carried out using the drill and blast method at sea level.

The cofferdams will be removed upon completion of the excavation works, enabling the water to flood a deep channel measuring 12ft for navigation.

The idea for the construction of the ship tunnel was conceptualised in the 1980s. Up to 18 separate studies to assess the value of the project have been carried out to date.

The Port of Long Beach Middle Harbor Redevelopment Project is an ongoing $1.2bn project to upgrade two old container terminals at the port and conjoin them into one advanced and green terminal.

The year 1985 saw the formation of the Lottlag (LL) Stads Skipstunnel (‘Stad Ship Tunnel Partnership’) involving both public and private sector organisations to elevate the project. The site proposed was from Vanylvs Fjord west to Molde Fjord.

The Norwegian Geotechnical Institute (NGI) carried out investigations in geological engineering, design of rock support and numerical modelling for the tunnel from 2001 to 2007 under a contract from the Coastal Development Authority.

The project formed part of the National Transport Plan (NTP) in 2002, but was rejected due to funding issues.